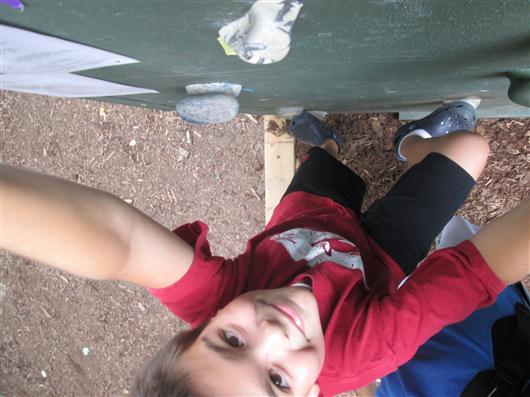 Ladies and gentlemen, it is my pleasure to report to you yet another awesome day at camp Timberlake. It is in fact the 30th awesome day we have had so far, which just so happens to correlate exactly to the 30 days that campers have been here. The weather today was mostly sunny with a small thunder storm in the mid afternoon and the temperature was a balmy 77°F. Meals consisted of delicious breakfast burritos (we had them for breakfast, didn’t see that one coming did ya?), Stromboli for lunch, and burritos for dinner (dinner burritos, not breakfast ones).

And now for the part you’ve all been waiting for…THE CAMPERS!!!

We will start off by mentioning some campers who are excelling in their activities. Today was rocket launching day for rocketry, and many a rocket was launched from Spencer’s Green. James B., Diego S., Austin T., Bryant W., Carson H., Enrique D., Jack F., and Colby P. all successfully launched rockets and received their bronze. Kip B. successfully launched a level 2 rocket and is en route to a silver bar. As for climbing, well, there was some good stuff there too. Nicolas M. and Walkes B. both received their bronze and fun was had by all on the Traverse Wall. In archery instructor Eric D. did pushups for every bull’s eye that was shot, and he ended up doing a whopping 150 pushups!

That concludes our daily broadcast to all of you folks back home. We hope you enjoyed it! Have a wonderful evening, and we will see you again tomorrow with a report on the 31st Day of Awesomeness.  In Airsoft the battles were fierce and the BB’s were flying so thickly that the sun itself was blotted out. Santiago S. managed to achieve his bronze bar in airsoft today, while Josh B. reported winning two games in a row. Meanwhile, Devin H. was working on his gold bar in airsoft and reported being confident that he will have it by the end of the session. In the Wild and Wonderful World of Wrestling John H. received his silver bar after an epic battle/wrestling match with wrestling instructor George C., in which John H. displayed surpassing skill and bravery in the face of much adversity. In other news, Nico M. played 8 games of tetherball today, and finished with an astounding record of 7 wins and only 1 loss. Interestingly enough, his older brother, Ricardo M., was the only opponent skilled enough to defeat him. In that final tetherball match both players exhibited such suave and vigor that any bystander would have mistaken them for professionals.

Timberlake, Over and Out.