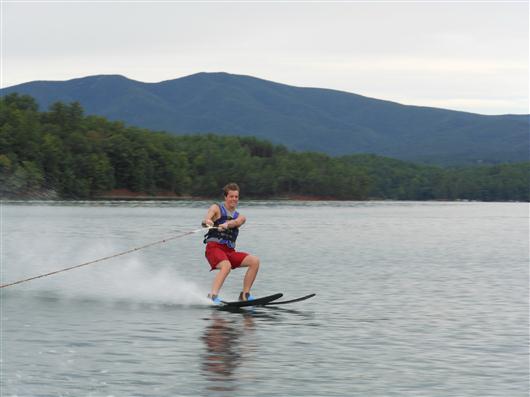 No rain today at Camp Timberlake, but there was a little overcast to cool things down a bit which led to another great day, especially for trips. Two trips were taken out today, one a waterskiing and the other a lunch hike to lookout mountain. Peter D. JB G. Beau A. Brendan A. Noah C. and Grant H. went on the waterskiing trip that went out in the afternoon and everybody had a great time knee boarding, skiing, and wakeboarding. The lookout lunch hike with Grant B. Ethan D. Victor A. Max B. Justin M. Mike P. George H. Parrish B. and Ian C. went great because they had a great view as they ate spaghetti on top of the mountain.
Back at camp safety talks were finally over so we could get right into the activities at the start of the period, which led to many bars being given out and almost earned. A silver was given out today to Pablo V. in guitar after a lot of hard work and dedication, and farther up the path three people took great strides toward bars in riflery, Henry H. for his bronze, Andres E. for his sliver, and Cody A. for his gold by shooting a 1/2 inch grouping! At the lake, Cole J. shined in kayaking and is just a hair away from getting his back deck roll down, and in swimming, Colby B. earned his bronze and Christopher F. came out victorious in the underwater pullout games. Up at the Mark, Max L. learned his half nelson in wresting today while a couple feet away Thomas C. and Elliott B. got their bronzes in fencing, and Tim M. earned his bronze and silver in the same class period, and right below them on Spencer’s Green Hendrix M. led a lesson in team sports. Across camp, Alex D. won jailbreak in tennis by being the last one standing in a volley. In other news, Max L. lost a tooth and was visited by the tooth fairy last night and given a quarter.
All in all today was a fantastic day at camp with perfect weather and plenty of time for activities and strides toward greatness and even with this great day ending everybody is already waiting for tomorrow to find out who won inferno.