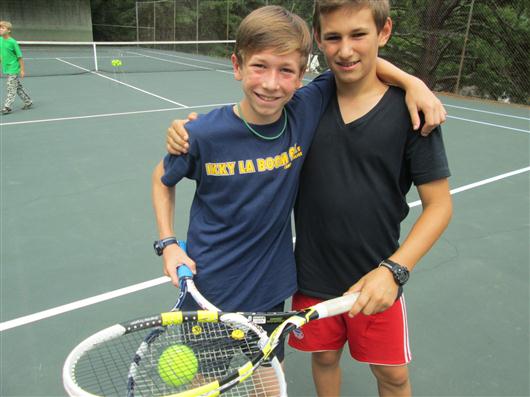 The day at Camp Timberlake began with the usual bugle that awakes all the campers from their great night of sleep that recharges them for the exciting next day. The morning began overcast and rainy but this did not hinder any of the fun that takes place as it passed over after a delicious breakfast of baked oatmeal and sausage links. The usual morning routine proceeded as Camp Timberlake rang high their voices to all of Black Mountain with the morning yell. Shortly after, chapel and cabin clean up took place, and man was it a great day in cabin cleanup. A summer high was set today as the cabin Tomahawk received a 10 in return for their hard work and dedication making the cabin spotless. As cabin cleanup concluded the day really kicked off into full stride with all the fun-filled activities.

The first half of the day held with it many triumphs as all the kids worked hard at bettering themselves in all of their activities. Nicholas O. showed great poise and patience as he moved one step closer to completing his rocket by gluing on his fins. Then in archery Matt W. did what many could not as he shot a bull’s-eye. An exciting tournament in airsoft took place today as Brian S. hosted a tournament to work towards his gold medal. After a friendly match in World Cup on the soccer field took place, Team USA consisting of Grady S. and Walker H. took home the gold medal. Tennis class played one of its favorites, jailbreak, which Fredrick S. won. The lake always proves refreshing on a hot summer day where Dash V. excelled in swimming class.

Many trips went out today in the beautiful mountains of North Carolina where there is lots of room for adventure. A kayaking and canoeing trip went to Section 4 of the French Broad River led by Zach S., who is working on his gold bar in kayaking; all participants included: Seth H., Liam L., Sawyer S., and James H.  Another trip went out to Little Lost Cove as campers: Nico A., Teddy O., Bryce N., Matt M., Michael F., Walker L., and Dash V., all ascended to the tops of the mountains while climbing. The final trip that went out today was an extensive overnight trip known as the Supertrip as it holds with it many activities such as climbing and kayaking that will be completed over the duration. The adventurous campers on this trip include: Hughes F., Hank B., Thomas L., Jack D., and Alex D.

As the day winded down and a dinner of barbeque chicken was consumed an exciting event occurred; for those of you who thought Hogwarts was the only place to play quidditch you were mistaken. Camp Timberlake held a tribal quidditch match between the Seminole and Iroquois tribes in order to wrap up yet again another great day at camp.