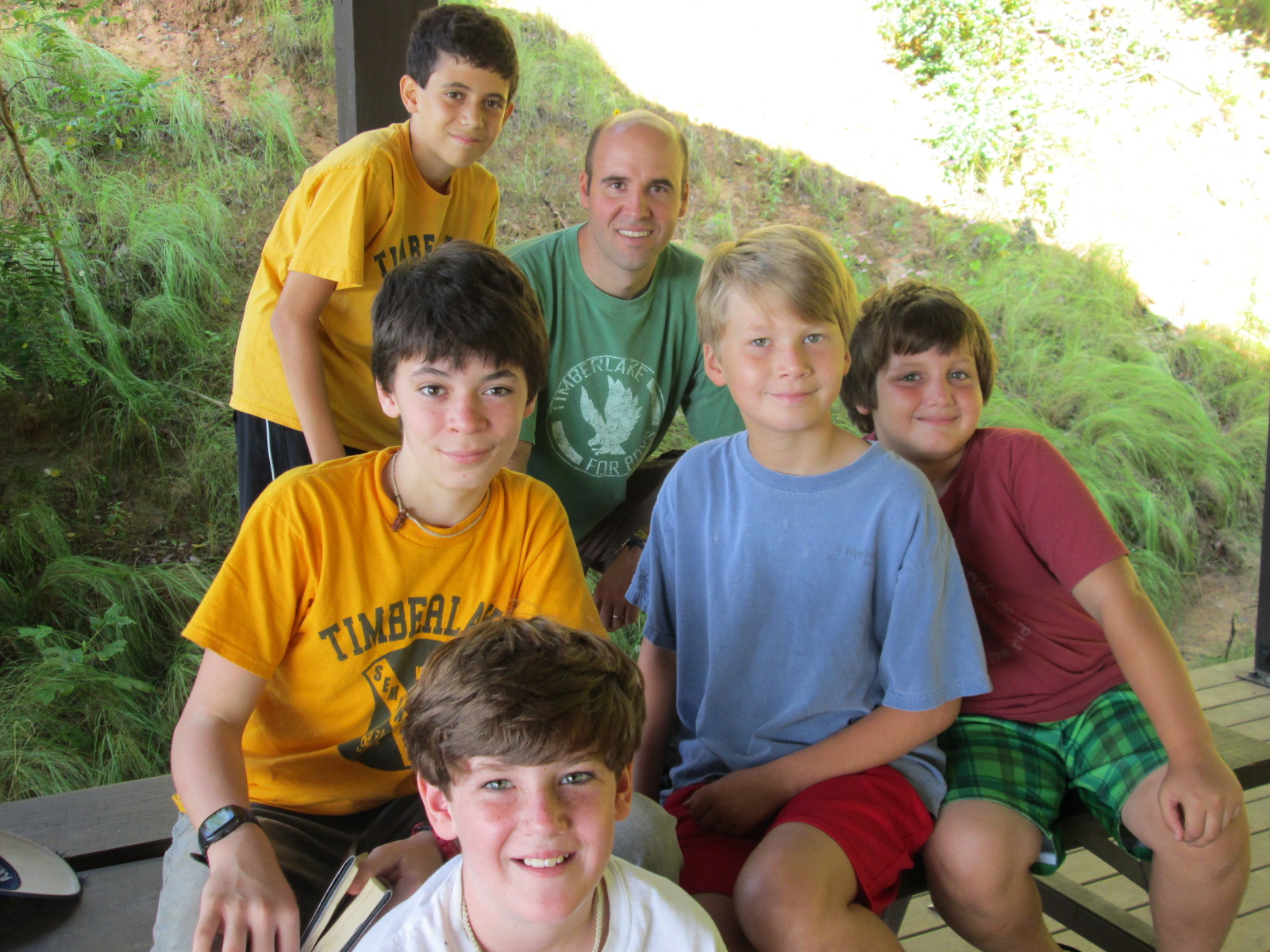 M.E.A.T.! “Men Eating Animals Together” was the great theme of the day. From sunrise to sun down, camp smelled of pigs roasting on an open fire slow-cooked, juicy, tender and later pulled to perfection. It is Timberlake’s tradition this summer to create some of the best BBQ in town and this “M.E.A.T. night” fell nothing short of ooh’s and ah’s as expectations would be blown away for a second time this summer.

From the moment the campers got up, the aroma of  BBQ was evident throughout camp. The smell of hickory blowing all over camp only meant one thing – it was sure to be a great day at CampTimberlake! This morning, Hughes P., Hank B., Thomas L., Jack D., and Alex D. returned home from a climbing expedition to the Chimney Mountains.  The overnight group also explored the Upper and Lower Creak Falls and ventured out to Devil’s Cellar.  Joe B., Coleman P., Cody A., and Zach S. went out for a fun-filled adventure that began with fly fishing in theMillsRiver and finished with a swim in the lagoon. When the trips returned home to the smell of roast pig, they knew that everyone was in for a treat.

As the day progressed, many campers worked hard in their activities, trying to learn something new or brush up on some already known skills. Some worked for medals while others simply wanted to compete and have fun. At lunch, Timberlakers  had chicken packed into pita bread with homemade sliced potato chips and, as usual, the salad bar with many topping choices. Later at lunch, we announced who won the previous night’s activity. The lower cabins had played Battle Ball. The kids started out with a slow pound on the tables, which turned into a much faster clap and cheer to hear that the Iroquois had taken the victory. Then it was the Upper Cabins’ turn. They had played the popular game Quidditch from the Harry Potter series that was played with brooms and all. The rumble of hands pounding on the tables got louder and louder, evolving into loud shouting after hearing the Seminoles had won.

After lunch everyone made their way up to the cabins for “THE BEST TIME, REST TIME!” a quote very popular for many summers among campers and staff. There is just nothing like a good thirty-minute break. After rest time, free time began. During this time many activities are opened up for campers who need some extra time to earn medals. We will just have to wait until Little Chief to find out who earned them. It is a very big deal to be recognized for a medal at this ceremony and as a staff we are very proud of those who have worked hard to receive them.

Moving right through the day, as the smell of BBQ had flowed throughout camp all day, from the offices of the Big House to the activities up on Spencer’s Green, we knew it was coming! Everyone at camp was drooling for what was to be some of the best BBQ this side of the Smokey’s. The dinner bell rang and, to the campers’ surprise, we ate dinner out on the picnic tables for an old-fashioned North Carolina Luau, CampTimberlakestyle. Not one piece of BBQ was left over. It was a good day at camp!