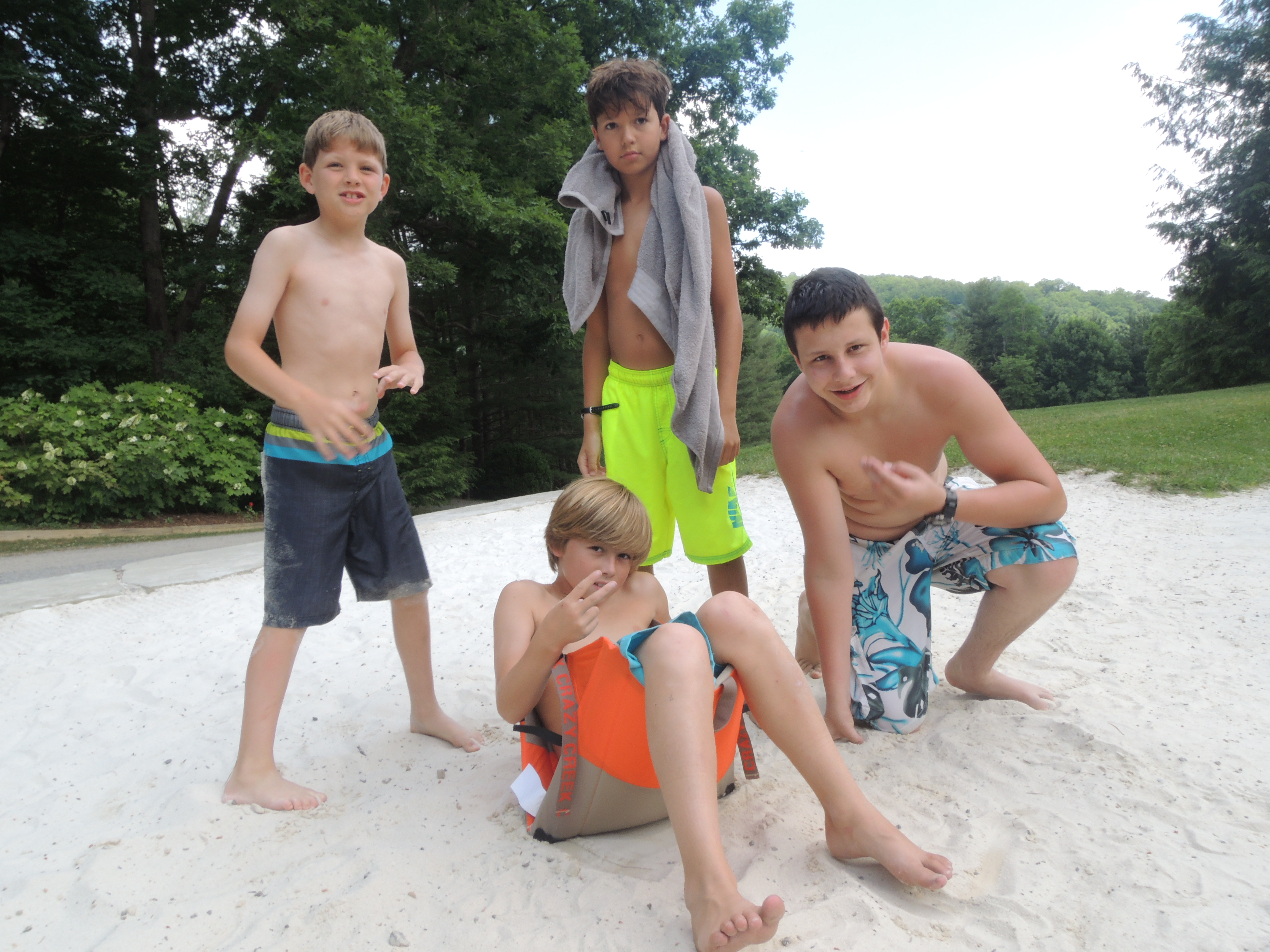 Last night marked one of Timberlake’s most revered ceremonies: Little Chief.  The ceremony celebrates campers who achieved excellence in their daily activities or commitment to camp and leadership.  Campers work during their daily activities towards meeting their bronze, silver, and gold bar requirements.  Achieving a bar is a great accomplishment at Timberlake.  Campers who demonstrate leadership receive commendations from their cabin-mates or counselors.  Commended campers get to leave a handprint on the standard at the council ring to symbolize how their leadership left a mark at camp.  The final and most meaningful award of the night is the promotions toward little chief.  Each camper begins as a brave and works towards achieving promotions and eventually Little Chief.  Campers receive a different color band for each promotion and take great pride in them.  The final promotion is Little Chief, the highest honor one can receive at Timberlake.

After Little Chief, the campers participated in their new favorite tradition, the post-evening-activity activity.  The lower cabins had a giant slip n’ slide down Mackie’s Green.  The upper cabins got a free-swim in Lake Doris.  That wasn’t the end though.  Stomper’s knob took a hike up to the shelter to camp out, and Big Slaty bonded over s’mores.

This morning the campers were woken up with a delicious breakfast of French toast and bacon.  Before breakfast, some campers left camp to go on a water-skiing trip.  Today’s weather was a perfect day for water-skiing.  The campers had a great time on the trip and were able to return for their afternoon activities.  After the trip, Alex S. beamed while telling everyone he was able to pull off a back flip while water-skiing.  After breakfast, the campers went off to chapel, which featured three camp-favorite songs: “500 Miles”, “the Banana Song”, and “Blind Man”.  Adam Boyd told today’s “true story”.  His lesson used a prank he once played on a friend to teach the lesson that the gospel should stretch our worldview.

Most days French toast and bacon would be the best meal of the day, but not this day.  Lunch was meatball hoagies, waffle fries, and Timberlake’s favorite desert, the beloved s’more pockets.  As soon as campers saw the list of food written on the chalkboard outside Tucker Inn, they began to clamor and chant for s’more pockets. First time Timberlake campers were initially confused by all the excitement but immediately understood after their first bite. Campers love all desert, but s’more pockets will always have a special place in their hearts.

Cabin cleanup scores were announced in lunch today.  The campers did a drumroll as the scores for each cabin were announced going from worst to best.  The campers waited anxiously to find out if their cabin would be crowned the champion of today’s cabin cleanup.  To build suspense, Counselor Michael stopped reading the scores when there were two cabins remaining.  Will C., confident his team would win, stood and raised his hands triumphantly.  When the results were announced, Will was right, as Greybeard boasted an almost perfect 9.9  to win followed closely by Tomahawk with a 9.8.

These nearly identical scores add to the budding cabin cleanup rivalry between these two cabins.  Tomahawk began the week with a victory and has had a high score each night.  Greybeard had a rough first day but has been at the top ever since challenging Tomahawk.  Greybeard, the oldest cabin, is expected to do this well, however Tomahawk, the youngest cabin, whose campers are half the age of the Greybeard campers, is the surprise of the cabin cleanup competition.

Now that safety talks are over, the campers are able to spend the entire class having fun and improving their skills.  Today climbing class was at the traverse wall, a bouldering wall.  Unlike most climbing walls, the traverse wall is low, and the campers climb from side to side rather than up the wall.  This gives the counselors a great opportunity to teach the campers a different type of climbing.  Team sports met at Spencer’s green for daily activities and the basketball court for free time.  During activity time, campers played Frisbee and football.  During class time, Josh H. completed the football section of a bar in team sports.

Not all free time was spent working on bars, however.  Some campers decided to enjoy a beautiful day on Lake Doris by going to free swim.  While at free swim, campers played games, such as categories, and jumped off the blob. Campers looking for competition went out to the woods with counselor David to play paintball.

As always, the evening activity was announced at dinner.  Counselor Matt put on his kayaking helmet and led Tucker Inn in a yell and drum roll to build excitement.  He ended the drum roll and yelled out “El Presidente”.  The campers screamed from joy then asked, “what is that?”  This is because El Presidente is a brand new evening activity.  These boys are the first ones to ever play it.  That’s just another example of the one and only memories that are made at Camp Timberlake; and these are sure to happen every single day!