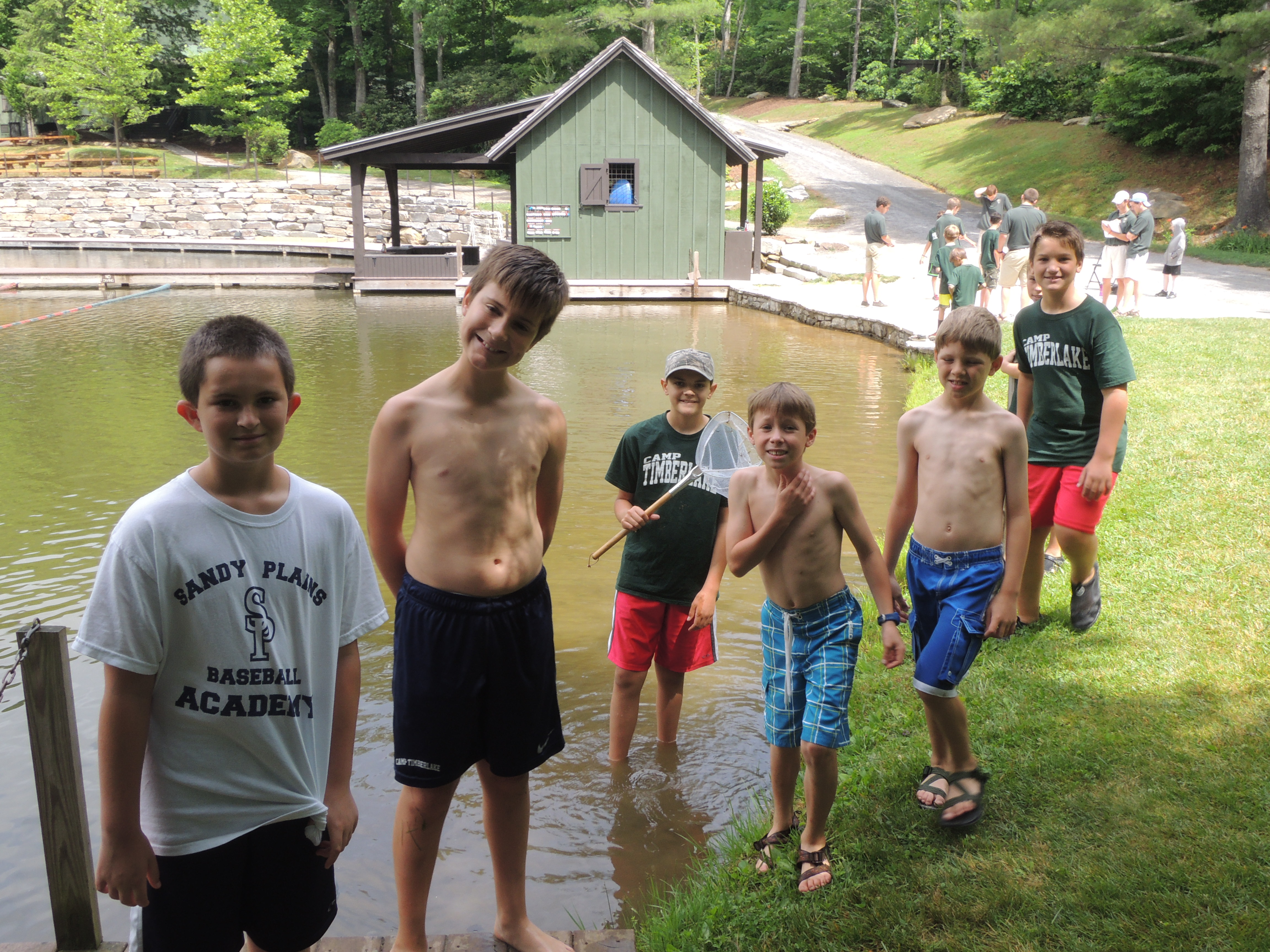 As God rested on the seventh day; so, too, did we at camp Timberlake. We kicked off the day with a highly appreciated hour long sleep-in and cinnamon bun breakfast. These were a big hit as my cabin refilled the tray many times with Thompson B. pounding down quite a few. After a rejuvenating morning chapel filled with prayer requests, we sang the crowd favorite song, “I am the way,” and a Will C. led camp hymn.  After an action packed cabin cleanup, the boys headed down to the lake front for some Sunday activities.

The frog catching yielded no reward as the valiant men failed to catch a single frog, but the effort was strong and, hey, it’s the thought that counts. On the beach front the future architects of Timberlake constructed various castles and houses out of only sand, and one decorative smiley face stood out in the crowd. The winners were Jacob J., George S., and Chuck H. with respective first, second and third place. Further up the river our campers built dams and fjords to compete in the weekly dam contest. Although the counselor duet of Andrew and Robbie started off strong; they were outmatched by the superiorly engineered dam built by the Graybeard combo of Will C., Will A., Ben H., and Calvin T.

Last but not least, “Sunday at the Masters” was a huge success. Counselors competed against campers to see who could manage a lower score on Timberlake’s 7-hole disk golf course. The Masters ended with the dream team combo of Quinn M. and Richard B., underscoring both campers and staff alike. After several hours of intense competition we rejoiced in the long awaited fried chicken lunch. The great debate was solved at my Little Slaty lunch table that the dark meat wing is indeed better than the white meat chicken breast. This debate was backed up with the empirical evidence of Andrew W’s pile of chicken bones. With greasy fingers and full stomachs the campers slept through the best hour… REST HOUR!

We then went on to a camp-wide free swim filled with dives, splashes, water guns and blobs, ending with a bang as Houston and Hugh were both blobbed nearly fifteen feet in the air. For the second time today Timberlake showed it’s more feminine side as Brad S., Henry M., and Cooper D., sang out Taylor Swift’s hit “We Are Never Getting Back Together” at the amphitheater. As all firework shows close with a grand finale so do we at Timberlake, with an evening filled with barbecue and fun. Landon W., Tim M., Griffen P., and Jimbo D. sought some tender affection at puppy camp. Tyler M., Josh H., and Will A. played a series of exciting Spike Ball games and a group of lower cabineers played ultimate frisbee. All of this was accompanied by the musical performance of David G. playing the guitar.

Overall it was a great day at camp filled with fun, friendship, and adventure.  I wish all readers a goodnight and good sleep as I know it will be appreciated by our campers after a long day.