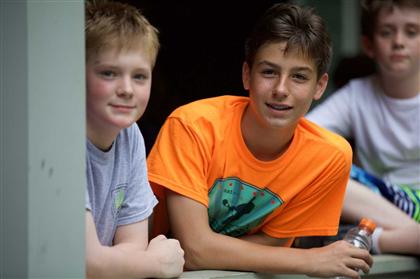 The bugle sounded across camp on a warm summer morning and another day of growth through friends and adventure ensued! The boys had a great breakfast followed by a chapel lead by Marshall Clark answering the question: “Who is God?” Quickly after chapel, the boys began their daily cabin cleanup contest which segwayed into their trips and first activities.

In Paintball, Ben Allen led his team to victory… every game. So, he decided to play a one v. all match because he got tired of winning. With the teams standing one v. five, Ben walked away unscathed as he topped everyone in his class yet again. Cole Snyder was the best swimmer in his class and displayed excellent form as he slid through the water. In climbing, Dash Vinson showed off his climbing skills as he ‘dashed’ across the traverse wall. Off property, a kayaking trip was taken to the Tuckaseegee with Ford Lange, Beau Adams, Brian Sholwalter, Seth Hutzler, Hank Boyd, and Jack Deal. And on the water skiing trip, Matteo Alliato showed off his skills wakeboarding— most likely the best we have seen this summer!

As lunchtime rolled around, the campers flocked to the dining hall to eat a camp classic—Taco In A Bag! They scarfed down their lunch and waited longingly to hear the results of last nights evening activity (Inferno). A drum roll sounded as the boys sat on the edges of their seats… A tie! Neither tribe emerged victorious last night, so all stood and cheered at the incredible effort put in by both tribes. Cabin clean up, however, was a different story. The winner of July 17, 2015’s cabin clean up was Stompers Knob! They placed first with a perfect 10 for the second day in a row! Tomahawk and Big Slaty were a close second and third place.

Rest Time lasted a short 30 minutes before the entire camp raced to the trading post area to get their snack and drink and to play tetherball. A free swim began at 1:30 and it was the most popular free time activity.

At 2:30, afternoon activities began. In Archery, Tom Bryan wore out his target and shot consistent groupings in the 9 and 10 rings. Canoeing had a great time this morning while practicing basic skills in a game called “Pirates” which was won by Noah W. and Rees R.  During Team Sports, Jake Lange showcased his arm in a game of football. In tennis, Sean G. “crushed it” and won the game of jail at the end of class. William Gay displayed impressive potting skills in his pottery class today as they made pinch pots to take home at the end of the session.

The bell rang at the Big House for supper and yet again, it was flooded as the boys ate a nutritious meal of grilled chicken, cheesy potatoes and broccoli. As they finished their meal, Brandon Chase announced that the Lower Cabins would be playing Capture The Flag and the Upper Cabins would be playing Ultimate Basketball!  The boys headed up to get ready for another intense evening activity. After competing, the evening began to wind down as cabins participated in their “post evening activities.” Free swims, trading post raids, laser tag matches, and camping out were some of the night’s activities. As campers went to bed, counselors lead a devotional relating back to the chapel given on “who God is” and read passages of scripture. The boys drifted off to sleep to the sound of taps as crickets chirped and the river flowed by. Overall it was another great day at Camp Timberlake.