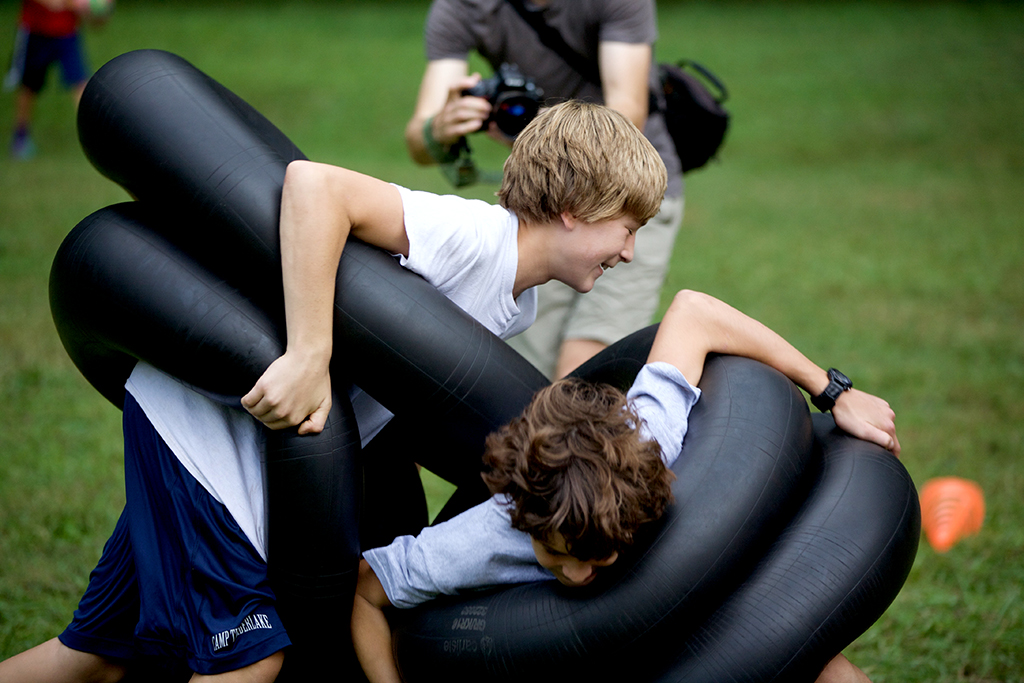 It was a beautiful day at camp, and as the sun broke over the mountains, every camper knew that it was not going to be an ordinary day. The bugle did not go off at seven in the morning, as it usually would, but instead, campers and staff were treated to breakfast in bed consisting of Nut-Dos and Chocolate Cow Juice.

At this moment, everyone in camp realized what had been rumored for the previous week. Today, Saturday July 25th, was Cowboy Joe Day, a day where we celebrate the immortal Cowboy Joe, who was a mighty fine cowboy and nut-do peddler who had a tendency to do some things backwards. So, in his spirit, we talk backwards, we wear out clothes backwards, and generally do most of the things at camp backwards.

Once breakfast had been had, Timberlake moved onto cabin cleanup, where the contest for the pizza party was heating up. Every cabin has a realistic shot at winning cabin cleanup for this session, and it showed in the ferocity for cleaning today.

Next came the Morning Activity, Ball-Battle, in which Jake T. shined for the Lower Cabin Seminoles, while in the Upper Cabins Seth H. and Ford L. led the Iroquois tribe to a victory.

After an hour of Ball-Battle, Timberlake moved onto activities, which in the spirit of Cowboy Joe, are done a little backwards today. Instead of staff teaching the activities, campers in the oldest cabin, GreyBeard, instead teach the day’s lessons.

Up on Spencer’s Green, Tom B. led climbing and belayed for the whole class period. Meanwhile, at Lake Doris, Grant H. taught the basic strokes during swimming class while Dane T. ran kayaking.

The end of the morning’s activities brought around lunch, where Timberlake was treated to a camp favorite, meatball subs and s’more pockets. The dining hall was nearly silent as campers and staff alike chowed down on the deliciousness that was today’s lunch.

Next came the best hour, rest hour, followed by free time and trading post. Free time is a great time for campers to compete in tournaments, and today was no exception, with Rees R. winning an Airsoft Tournament, and with it, free trading post.

Mid-afternoon soon came, and campers got ready for their afternoon activites. Up at the archery range, Drew W. led class and taught campers the proper form for holding the bow. Down by the backpacking hut, Colby F. taught camp craft and held a contest to see who could tie the best tarps, which was won by the Seminoles. In pottery, Kennon S. instructed campers on how to make pinch pots while Matthew J. channeled his inner rocket scientist and trained America’s future astronauts in rocketry.

However, the final, and best event of the day was still to be had. Ever since the wee hours of the morning, a crack team of chefs had been cooking pulled pork for the dinner cookout on Mackey’s Green.

The cookout really is one of the most remembered events of the summer, and it showed. The line to eat may have been long, but it was worth it, as no one left hungry and without a smile on his face.

As I write this, campers and staff are currently in the Mullet Games, an amalgamation of Hubcap Tossing, Watermelon Seed Shooting, Lawn Bowling, Counselor Skeet Shooting, and John Cougar Mellencamp. Once these are over, we’ll transition to the Evening Yell, and then to Chapel, which will be led by Program Director Brandon C. After that, Timberlake will seemingly get ready for bed, but instead will head up to Spencer’s Green for a nightcap of fireworks put together by Dan.

Cowboy Joe Day may be one of the wackiest days at camp all summer, but it is also one of the most cherished.