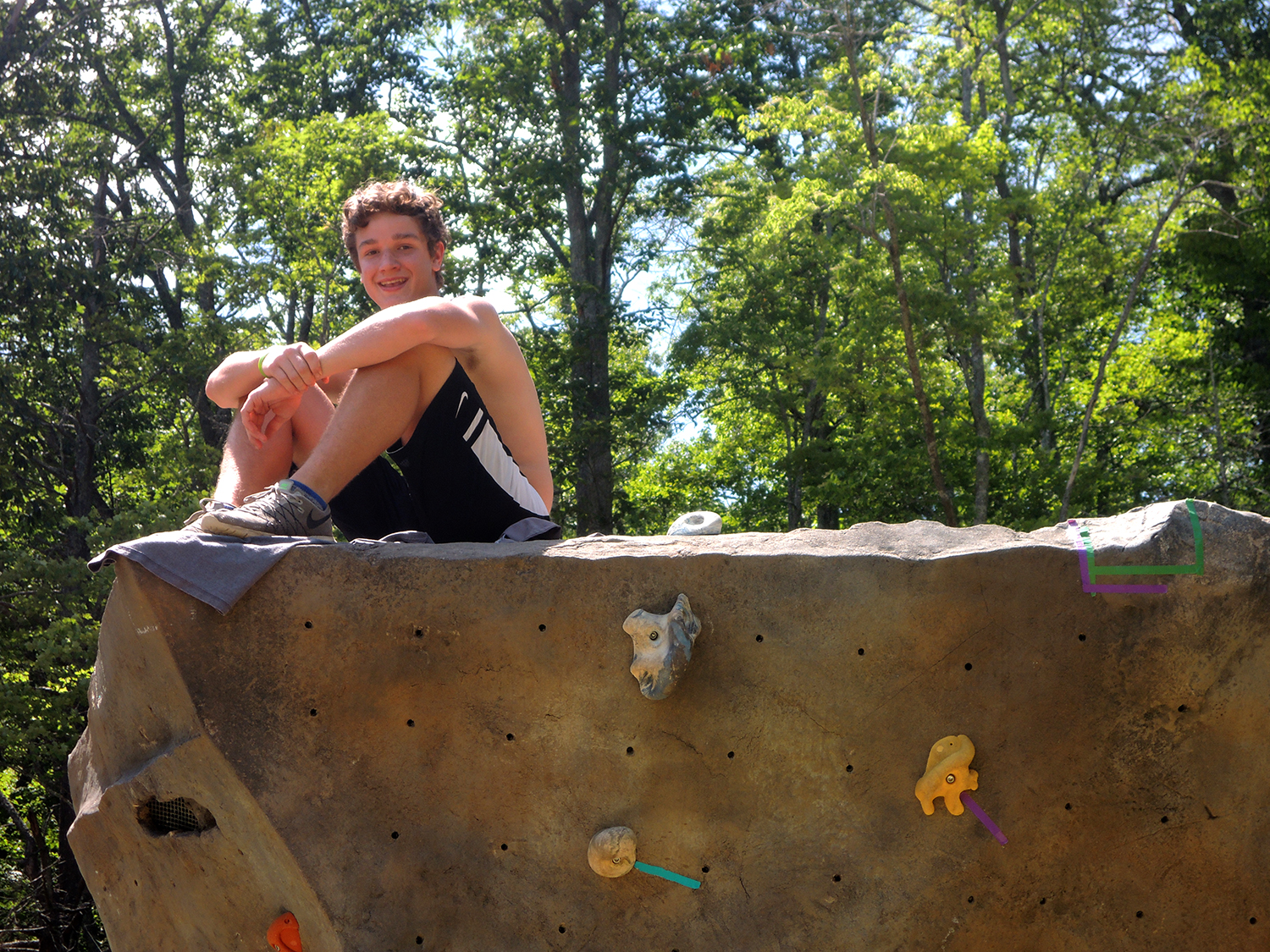 What a day it was here at Camp Timberlake! Our new boys that got here yesterday hit the ground running in their first full day of camp while our 2-week campers continued to explore our vast campus, deepening friendships every step of the way. It was very exciting to watch our campers who have already been here for a week embrace the new guys, and I would love to give a special shout out to Aubrey S. and Harrison B. who did a fantastic job of making their new cabin mates in Tomahawk feel welcome!

The sunshine was out in force here in Black Mountain, and our boys enjoyed an action packed day! After a great breakfast of some fresh and gooey cinnamon rolls, we all headed outside for the morning yell and then trekked up to Chapel, where we heard an inspiring message from our Director John M. that emphasized that God is always in control. After Chapel and cabin cleanup, the cabin of GreyBeard, our oldest cabin, headed out on the always-memorable GreyBeard trip! The trip involved a great morning hike, hitting an Asheville Tourists baseball game, and grilling out steaks at Lake Tomahawk. It is truly one of the best days of the year for those guys and they will remember it for a long time.

Back on property, 1st and 2nd periods were super strong with backpacking making some sweet s’mores, kayaking working on their rolls and climbing hitting our state-of-the-art upper tower. After morning activities, we had an awesome lunch of burrito casserole that included some stellar guacamole, and then we got to go to the best time…(at least for the staff) rest time!

After rest time, we had an extremely active free time that featured many activities being open for the campers to work on bars. Bars at camp are one of the ways we track proficiency in activities, with bronze bars being a great mark to strive for as a younger camper, and silver and gold bars generally being awarded to campers who have been at camp for several years and have started to master an activity. Tennis was one of the activities open, and William H. and Cole L. formed a fierce doubles team that was able to take down my co-program director Davis and I in a hard fought match. Will L. and Miles S. also showcased a strong stroke on the courts as we celebrated the Wimbledon final being played across the pond by playing some epic tennis matches.

Over in cooking, Spencer G. channeled his inner Chef Boyardee in the kitchen by whipping up some delicious egg cups. The climbers worked on their bouldering skills and fencing had some matches for the ages up at the Mark to close down free time.

After free time and 3rd and 4th activities, we went down to for a classic Sunday fried chicken dinner, where the anticipation started building for the announcement of the evening activity. But before the announcement, we were greeted with a few surprise guests in the form of Action Jackson, Vertical Jones, and Speedwalking Stephon!! These guys performed an epic parkour show that had the kids going nuts! Be sure to ask your sons about the exploits of these characters! After those guys headed off the stage, counselor Nick L. donned the red helmet, ran around like a mad man, and then shouted CABIN NIGHT!!!!!!! The crowd erupted as everyone immediately started to anticipate what their cabin would be up to that night. Cabin Night is probably my favorite night of the session because the boys get to bond and hang out with people who they may have only known for 2 weeks, but they start to form incredible friendships that endure through the summer, through the school year, and re-unite every summer here at this remarkable place. Tomahawk enjoyed putting the puppies to bed before heading up for a campout under the stars, Little Piney had an awesome lazer tag game and then slept on the mats in the gym with our trusty C.I.T.s, Big Piney made some delicious rice crispy treat sushi rolls featuring Swedish Fish as the center, Stomper’s Knob hit the water slide before playing some cards and board games, Little Slaty took on the Program Staff in a glorious game of whiffle ball, Big Slaty headed out to the Boyd’s house to play some pool volleyball and GreyBeard finished up their trip! WHOOOOOO, what a great night!