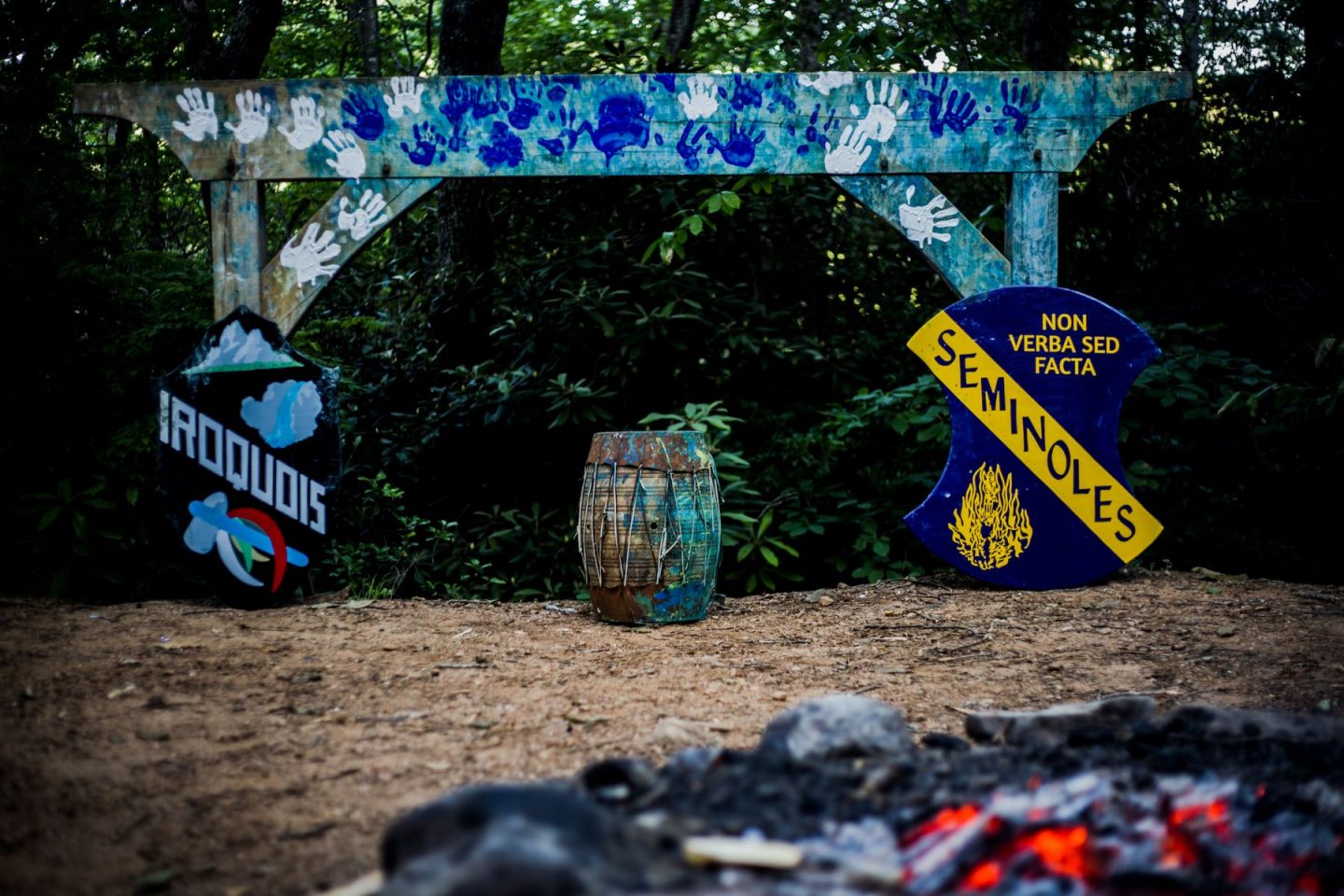 The First Little Chief!
As the Sun rose, and revelry chimed, the men of Timberlake were greeted with another brisk morning here in the mountains of Western North Carolina. After a quick walk down to the Tucker Inn, the guys were treated to a camp special…GEOMETRY BREAKFAST! Oh yes, geometry breakfast, the meal that is both fun and filling. The perfect way to start another awesome day. When all the food had been devoured and the plates cleaned, it was out to the Morning Yell. After we let our voices reign on high, the guys went to chapel where John M. continued our study of who man is.
To say the day was great would be an understatement. The classes were full of excitement and joy. Despite the chilly temperatures, the swimmers braved the water and learned new strokes! Tomahawker David H. really showed his bravery by jumping right into the cold water along with all the Greybearders. In climbing, Shade J. David H. Sean R. Dylan G. Ethan S. Bodie D. Josef M. and Johnathan A. all made significant progressions on their way to getting bars. Up the mountain in the Mark, Colby S. taught the other wrestlers how to perform a penetration step along with the double leg takedown!
After second period, the guys went back down to eat a great lunch of Italian subs! Once lunch was finished, the winner of last night’s evening activity, Great Escape, was announced. SEMINOLES WIN!! The daily cabin inspection scores were announced as well. Greybeard scored yet another 10 and are now on a two-day perfect streak. The last announcement of the day was that of a free swim soon to happen at free time! The guys went crazy with excitement! But the campers would have to wait. For now, it was on to the best time, rest time!
After the conclusion of free time the classes resumed. The guys in cooking made delicious sliders with various toppings such as fried eggs and bacon! The look on James S. face when he took his first bite was priceless! Over in pottery, the guys learned basic techniques for using the wheel and are on their way to making mugs! Soon enough the dinner bell rang and the guys were served chicken casserole, with a dessert of mini cherry pies! Yumm. Tonight the guys attended the first Little Chief ceremony of the summer and then proceeded down to Mackie’s green for the evening shaving cream war!
During the Little Chief ceremony, many received different promotions and commendations. Those promoted to Scout were Jack A, Leyton H. Luke H. and Drew S. Those promoted to Guide were Ren G. and Lucas O. Those moving up to Pioneer were Richard B, and Brent S. Trackers followed with Eli C, Anthony G, Hugh S, and Andrew S. The boys who have reached Hunter were Jacob A, Michael A, AJ R, Thomas S, Avery S, and Nathan V. To conclude we had the ranks of Warrior and Pathfinder, the hardest ranks in camp other than Little Chief. Those to receive Warrior were Chuck H, Aidan K, Colby S, and Owen S. And the rank of Pathfinder, Thompson B, Jack B, Henry Broshar, Jesse C, Spencer G, Hunter S, and Gabriel V. Congratulations to all. There were also some six year bands handed out, Jacob A, Thompson B, Cole H, Chuck H, and Nathan V were the few to receive these bands. We thank you all for these years you have blessed us with your young men. A special commendation goes out to Michael A, for receiving his silver in guitar! What a great first week! Commendations were also announced during the Little Chief Ceremony. In Tomahawk the Camper Commendation went to Ryker R, while the Counselor Commendation went to Max W. In Little Piney Camper Commendations were Jack A, and Leyton H, while Counselor Commendations were Brennen B, and Leyton H.Big Piney had Luke H and Brent S as Camper Commendations and Luke H, and Lucas O. Stompers Followed them with Thomas H, and John R as Camper and Thomas H, and Aiden Morris as Counselor. In Little Slaty Jacob A, Bodie D, and Carter S, received Camper, while Pacey S, Ethan S, and Carter S, all received Counselor. Big Slaty came  with Ezekiel B, Jack B, and Hunter S as Camper, and Jesse C, Jake H, and Aidan K as Counselor. To finish off the evening Greybeard announced James B, Avery S, and Owen S, as Camper Commendations, and Michael A, James B, and Owen S, as Counselor Commendations.
It has been yet another fantastic day at camp for both the campers and staff. Soon the Sun will set and the moon will rise and the guys will be fast asleep, preparing for another day at camp. We are all looking forward to see what fun adventures tomorrow will bring!
Singing off,
Nick L.
Cooking & Soccer Stompers Knob Counselor
Mighty Seminole