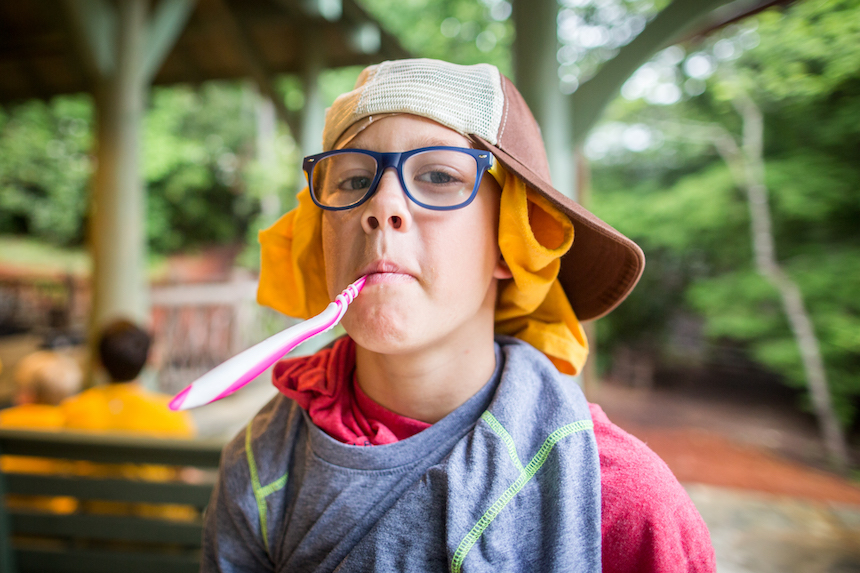 As the day began, the sun was late to show. The dreary daze, however, couldn’t keep the campers from having yet another amazing day at camp. Oh no, not even the melancholy weather could affect the joy that coincides with camps favorite meal, GEOMETRY BREAKFAST! Who knew math could be so tasty? After the unique math lesson ended, it was outside for the morning, silence? A bit of a switch up from the usual morning yell, but on the brightside, our voices were given a chance to rest.

At chapel, Tyler S. recalled a humorous tale of pranks and tomfoolery that occurred on a hunting trip he attended as a child…the only catch was that he was the one who was pranked. But alas he was saved by his father! Tyler’s true story was nicely paired with the 1 st verse from Ephesians chapter 2. The story set quite the example of how we have all been saved by God’s grace. After the closing prayer it was straight to one of the most competitive contests camp has to offer. Cabin Cleanup!

After an hour of ferocious cleaning it was time for the daily activities to begin! Though the weather was subpar, everyone seemed determined to make the most of the day! The guys in pottery stared adding their finishing touches on all the pieces they have made! In swimming, Tyler S. took the next step to getting his silver by treading water for twenty minutes! Up the mountain at the Mark, William B. demonstrated to the rest of the class how to perform a double leg take down! Olympics bound? Maybe!

Soon enough it was time again for yet another camp favorite, PIZZA DAY! Trust me, there is nothing better than pizza for lunch. It is the meal that everyone longs for whilst at camp. The meal was interrupted, however, when the classic “Come on Eileen” began to play through the speaker system. The whole entire dining hall erupted in the singing of the songs chorus. It was quite the spectacle! After lunch came the announcements everyone was waiting for: Cabin Cleanup scores, and the results of Battle ball. In a shocking turn of events, Greybeard was dethroned as the youngest cabin, Tomahawk, won cleanliest cabin! Then came the results of battle ball…Iroquois wins! As a proud Seminole I must confess that this news did not bring a smile to my face, but it happens. It’s fine, I’m fine…

After such an eventful morning, rest time came at the perfect time! During free time, the boys put this renewed energy to good use by various tetherball and thunder ball games! Soon enough the daily activities resumed the boys went back to work, learning the various and exciting skills Timberlake has to offer. Over in backpacking, Garrison B. was a big help in teaching the younger campers how to tie different knots! In climbing, both Jack and James B. completed the infamous Overhang! Up at the archery range, Jay W. Mitchell G. and Jake W. all shot target requirements that will help them earn bars! Watch out Katniss Everdeen!

As the dinner bells chimed, yet another fantastic meal of burrito casserole was served! I believe it’s safe to say that there were no leftovers. After the meal concluded, the highly anticipated evening activity was announced. TRIBAL TRIVIA!! I have hope that my beloved Seminoles will reign victorious tonight! Only time will tell. After evening activity, the cabin of Stompers Knob will have a surprise waiting for them. For tonight, the great men of Stompers Knob will be officially initiated by the men of Greybeard into the upper cabins! So to the men of Stompers Knob, we say welcome! I must now join my cabin in this, their special time. I cannot wait to see what other glorious adventures tomorrow will hold!