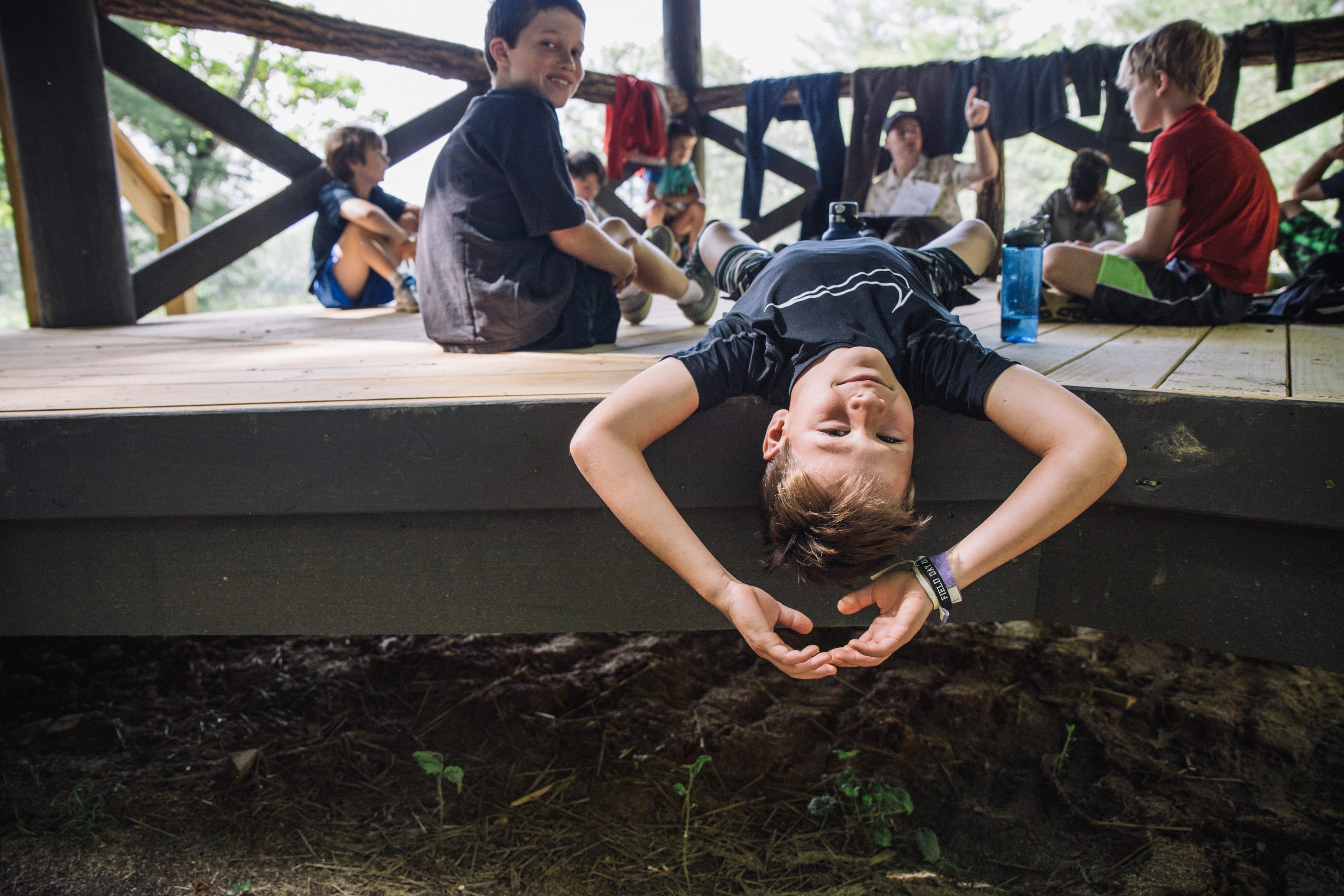 The bugle went off like a starter’s gun signaling the race to the Tuck. The campers went barreling down the hill to breakfast and were met with delicious chicken biscuits. After breakfast, they went to chapel where Counselor Taylor M. told a story to illustrate how our sin makes us dependent on God’s grace. Next, the campers moved on to cabin cleanup to continue their fight for the coveted golden plunger, the second most sought after prize at camp behind the banner.

Now that campers are acclamated to their activities, they are beginning to excel at them and push towards earning their bars. Brennan B. showed great improvement in his ready position and shifting in mountain bilking. Climbing class saw a number of successes today. The campers learned how to belay and tie a figure eight follow-through during activity time and during free time, Josef M. and Porter S.  climbed to the top of the tower. Additionally, Kaine P. crushed a counselor in paintball and Jake H. started his gold in archery by hitting the target from 40 yards. AJ J. and Benjamin E. earned their bronze bars in Fencing by learning all the basic footwork and bladework. HP got close to earning his bronze so be on the lookout for that along with many other bars the campers are sure to earn as they hone their skills in their activities.

Lunch, as always, was a highlight of the day with lots of exciting announcements and great food. The campers wolfed down philly cheesesteaks and told stories of their first two activities until the cabin cleanup announcement stole their attention. We take cleaning very seriously here at camp and during the announcement every camper sat fervently hoping their cabin would be victorious. In the end two cabins, Stomper’s Knob and Big Slaty who tied with 9.0’s, emerged from the fray one step closer to the golden plunger. Next the anticipation built even further as we announced the winner of battleball from last night. The Seminoles won the upper cabin division and the Iroquois won the lower cabins, led by a stellar performance from Barrett C.

We also had a lot of excitement off of camp property today with two trips going out. During the first trip of the day, Mason B, Thompson B, Jake K, Logan B, Owen S, and Miles B went waterskiing. Our second trip was a mountain biking trip to Black Mountain with Dawson G, Carter S, Tommy S, Wyatt S, John R, and Sean R. Counselor Joe B. was excited to see each of the boys put the skills learned in their activities in action out on the trail today.

As I’m writing this, the two tribes are playing El Presidente, the most recent competition in their quest for the banner. I’m a little biased but I’m confident the Iroquois will win tonight to pull ahead in a tightly locked race.