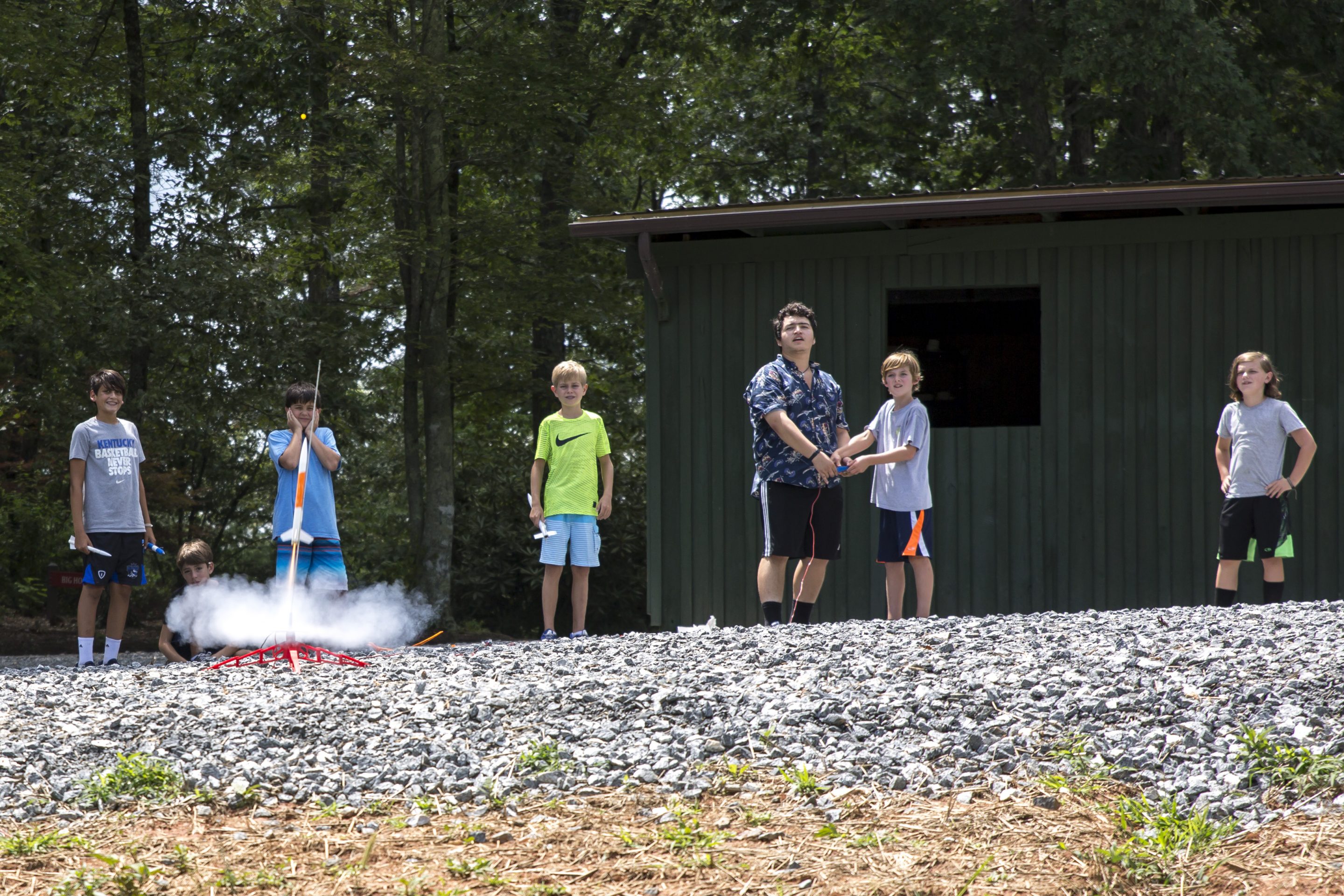 “Good morning Little Piney, it’s a new day! Whoo!” could be heard camp wide at the beginning of another awesome day at Timberlake. It was another cool mountain morning as campers and staff alike sleepily stumbled from their cabins to breakfast as the setters bell rang out across camp. Some came to breakfast ready for trips like canoeing on the Catawba River or kayaking on the powerful Pigeon River. We all stood around our tables and sang the blessing, then we said the blessing before scarfing down an incredible amount of hash brown casserole and blueberry scones.  After a quick breakfast we all ran outside to a morning yell lead by none other than two of our Greybeard campers: Archie D. and Carson H. Then it was off to chapel, where it was time for another “true story with Taylor Moody!” Taylor told a story about getting his first BB gun and related it to how God requires we admit our sin and need of Him.

As our day continued, so did the race for the Golden Plunger! Cabins cleaned furiously in an effort to win the day and make their claim to be Timberlake’s cleanest cabin. From there, activities began, in cooking class Dylan C., Jack G., and Will S. made some awesome grilled pizza while kayaking class practiced hip snaps so they could improve their roll. In Basketball, Archie D. got his gold and Will G. played the instructor 1-on-1.

Lunch was a hearty meal of jambalaya and cornbread that fueled campers and staff alike for a busy afternoon! After announcing the activities open during free time, our fearless leader John had a special announcement… His wedding ring had come off during shaving cream war last night, and anyone who found it at free time today would receive a bountiful harvest of 14 FREE TRADING POSTS AND GOLF CART RIDES EVERY DAY! So after rest time, the area was flooded with ring hunters. They searched to no avail today, but the offer stands until the ring is found. Rocketry got a chance to launch their rockets today as well, some of the successful launches included Shailen Z., and Baran D. Free time was also filled with trading post, a free swim, an opportunity to earn guitar bars, and an airsoft tournament!

At the end of free time, a bugle rang out to signal a move back into our activities. This afternoon Court J. earned a bronze in wrestling! The canoeing trip returned with campers Parker C., Brendan D., Cole S., Sebastian O., Bridge B., Tayman H., and Daniel H. The trip resulted in Parker C. earning his silver bar in canoeing! On the kayaking trip Ben A., Phillip S., Henri FP., and Geoffrey M. came in a closer to supper time after surfing some “seriously steezy rapids” on the Pigeon. Overall it was a very full afternoon here at camp!

As fourth period wrapped up, the setters bell tolled once again calling all down to the tuck for a delicious meal of chicken fajitas and churros! Seeing as this meal is a camp favorite, the meal was devoured and trays were refilled on multiple occasions. Greybeard, a cabin of only seven campers, ate so much of it we ran out of hot sauce! This was the perfect meal for tonight because we needed a big meal for the biggest of games. John called out the infamous “annnndddd nooowwww!” and we all began to yell and drum roll in anticipation. The Sultan of Fun donned his red helmet! ran around the dining hall! and then… out the front door? Where was he going you may ask? To replace his helmet with a pirate hat! Because tonight, we played Pirate Ball!!! Pirates of the Caribbean music filled the Tuck as campers celebrated with joy– Pirate ball is one of our most popular evening activities here.  It was a hard fought battle of rafts and water polo tonight, by the end everyone was worn out and ready for bed, so we headed up to our cabins showered off, and ended our day with a devotion. As taps echos across camp tonight, campers drift off to sleep wondering who won tonight’s activity. We’ll find out tomorrow at lunch!