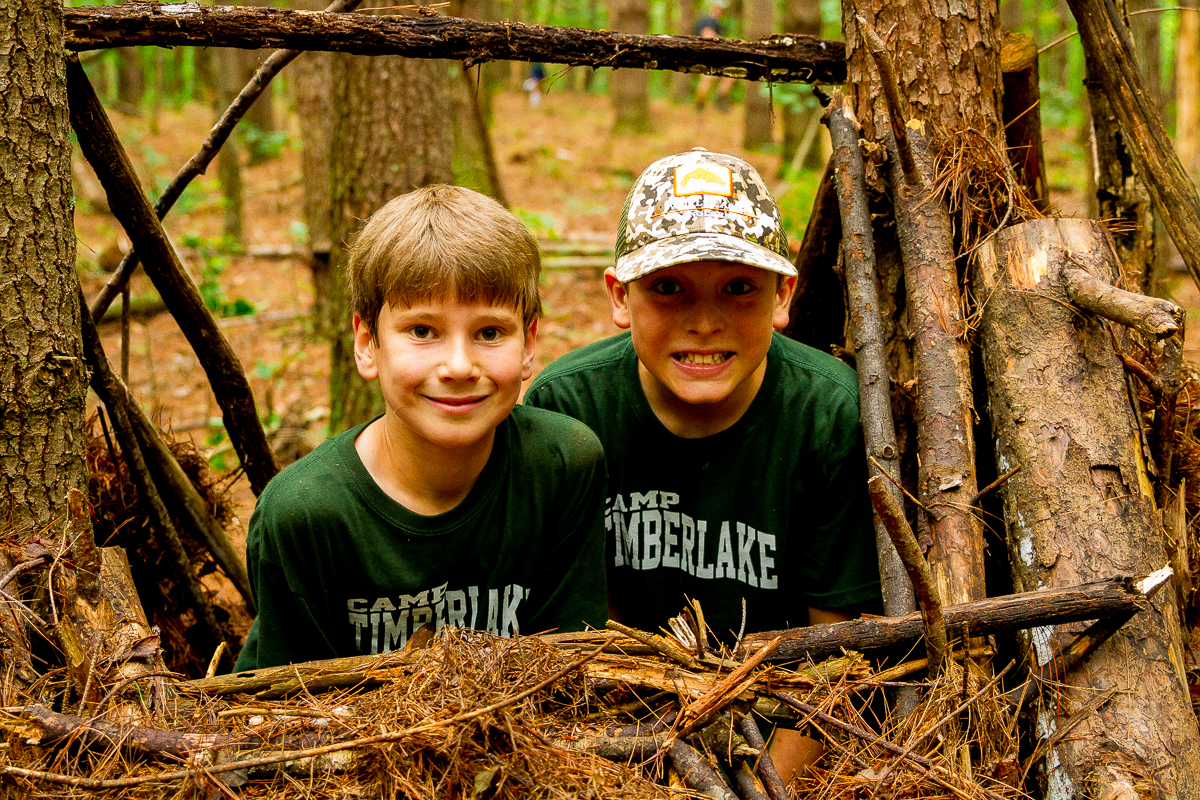 Today was a glorious day at camp Timberlake as we woke up to the best weather you could ask for and the sight of our nearby mountains covered in mystic loveliness. Sundays are extra special here at camp, as it is our take on a day of rest.

It starts with what our counselors and older campers look forward to all week, getting to sleep in a whole hour. That’s right, we sleep in till 8! Then a breakfast that some of our younger boys will swear to you is part of a nutritiously balanced breakfast, cinnamon rolls. After cleaning the cabins, we had a series of competitions instead of our regular classes. The contests consisted of sandcastle building, fort building, frog catching, and a Sunday at the Masters disc golf tournament.

A few of our champions of the day were the Xpert Fort Builders. This victory took the combined efforts of Britt M. and Wes H. The Sunday at the masters winning team, Team Minecraft, was composed of Ben R. Henry M. and Eli C. The frog catching competition took an interesting turn. The boys were surveying the banks and lakeside and coming up short. The sound of frogs croaking kept their energy high, but at the end of the day William B. walked away victorious with the only frog caught. There should be an honorable mention for Gus C. since he caught the most dragonflies and was even able to spook a bird into dropping one, effectively saving its life. After our lunch, Further In found out that they won cabin clean up today and then we had a long rest time.

During our free time today, lots of activities were open for campers to work on bars, and they did not disappoint! Meier M. and Wes H. got their bronze in Airsoft! Topher C. got his gold in Swimming! And Britt F. did his one-match-fire in backpacking! Speaking of backpacking, there was a day hike out today to Max Patch on the Blue Ridge Parkway. The hikers left after breakfast and had lunch on the top of the patch. Our campers were able to see an Elk and an amazing 360 degree view, including the Smokies and Mt. Mitchell on this perfect day hike. For dinner this evening we had a cookout up at the Mark with enough hot dogs and hamburgers for 2 Timberlakes! When dinner concluded, everyone went inside for a special performance by the Black Mountain Oysters, the famous traveling band made up of some of our musically gifted staff members. All in all it was as close to a perfect day as you can get.