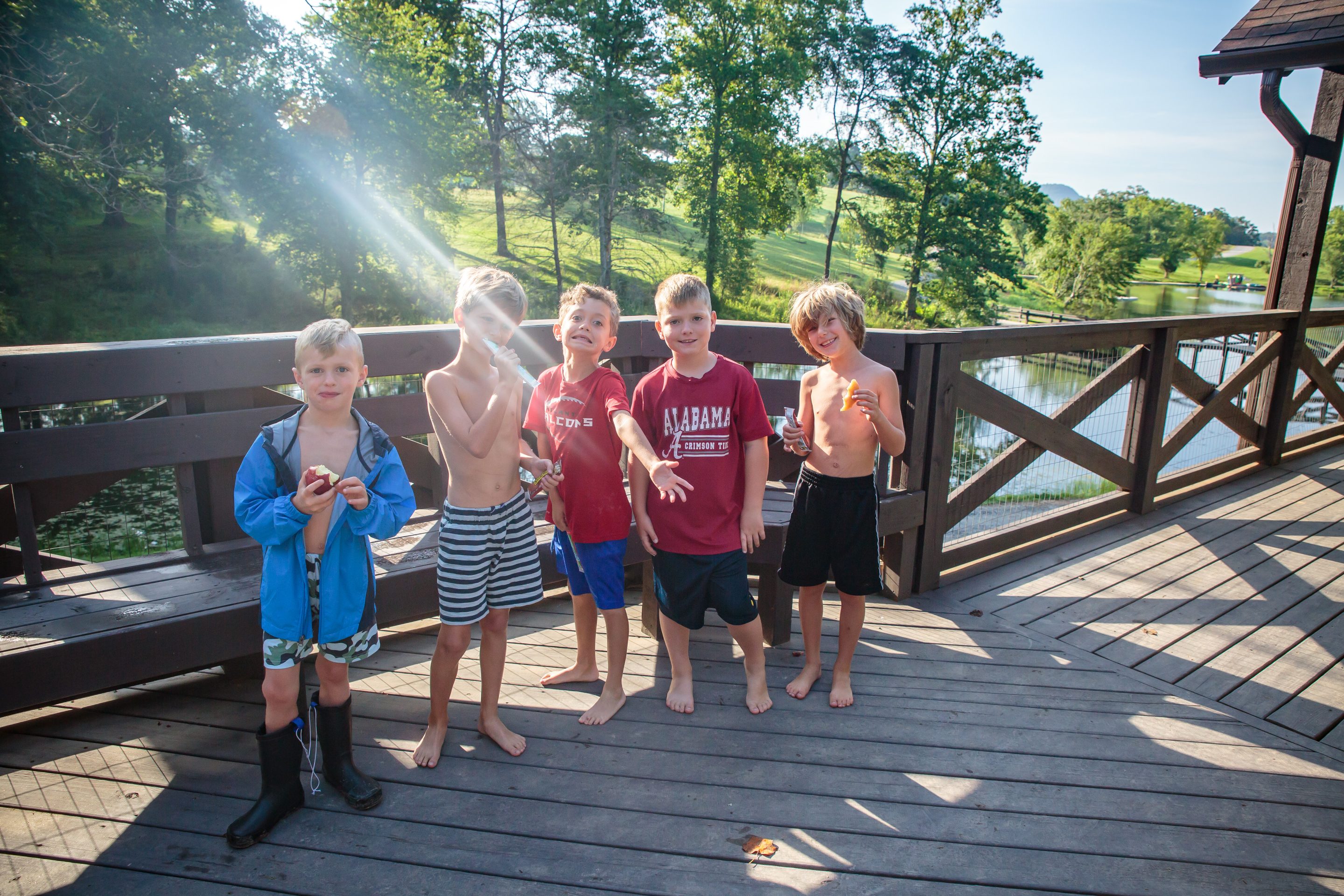 This special holiday is a favorite among campers, and it’s basically a Camp Timberlake version of opposite day.

Today the cabins were woken up to breakfast in bed by Cowboy Joe himself (our director John Menendez)! The campers enjoyed delicious nut-doughs (donuts backwards), yogurt, and milk in bed. They put on their clothes backwards, and they headed up towards the Mark for a game of battle-ball (The entire daily schedule of the camp is in reverse so the evening activity comes first). The Iroquois won the upper cabin round, and the Seminoles and Iroquois split the lower cabin rounds.

The camp walked backwards down the hill to their 4th-period activity. After 4th, the camp gathered together for delicious lunch of chicken and waffles lunch in the Tuck. The campers patiently waited for Cowboy Joe to announce the winner of cabin clean up, drum roll please …. it was Little Slaty who won cabin clean up for the 3rd time in a row with a perfect 10 or Turkey in bowling terms (a 10 in cabin clean up is super rare, so Little Slaty winning 3 times in a row is historical). The irony was that all of Little Slaty was on a trip today, so they were not even at lunch to celebrate their victory. Cowboy Joe also announced that the Iroquois won Commando (the sessional water balloon battle), and the Seminoles won tribal soccer. Overall, a very exciting lunch for Timberlake.

After lunch, the campers went immediately to free time (usually it would be the best-time rest-time, but here’s that backwards rule again), during free time Gresham C. earned his Silver and Gold in basketball! All of camp enjoyed a snack from the trading post and then headed to the best-time rest-time! After rest time the boys moved to, you guessed it, 3rd period then 2nd period, then 1st. They rode bikes, played with puppies, molded clay, kayaked, played disc golf and some basketball all the way up until dinner time. This is where it gets exciting. Cowboy Joe Day involves a pulled pork picnic on the beach! The campers ate pork sandwiches, mac’n cheese, beans, cookies and lemonade with each other while hanging out in community at the beach. It is personally my favorite meal of the session. We ended dinner of with Cowboy Joe leading the camp in the evening yell (the reverse version of the morning yell), and the campers headed up the hill to chapel. The chapel is amazing; you can hear the boys singing, yelling, and worshiping from the road leading up to camp’s entrance all the way back towards the back of camp at Mark. The boys really get into the songs (especially when the camp favorite song “Noah” is on the chapel line up). The campers heard a true story and a message about ‘Who is Jesus’. Usually, after chapel (in the morning) the boys head back to their cabins, but not today. Carter Boone announced that yet another evening activity would take place today: Stealing Skins. The Campers erupted in cheer and ran to put their tribe jerseys, closed toed shoes, and fetch a water bottle because ‘hydration never takes a vacation’. Stealing Skins is a legendary game, and the campers compete, unlike any other evening activity you could ever witness. I’ll tell you one thing, Stealing Skins is very similar to camping: in tents (intense). The two tribes played as hard as they could round after round. When the final whistle of the game went off it was time for the day to wind down. The campers showered and brushed their teeth, and settled in for some family time in the cabins. A perfect ending to a quirky, backwards, fun, and adventurous day here at Camp Timberlake.