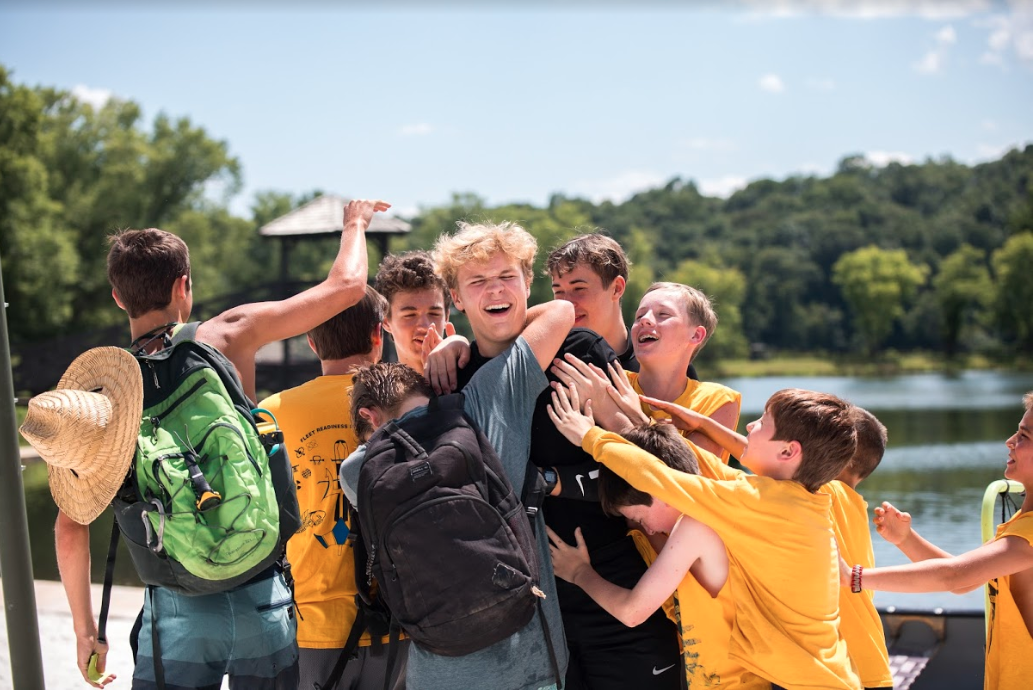 A blanket of mist covered the lake this morning as campers arose to an unusually cool, but much welcomed morning. The guys donned their sweatshirts and moseyed down to The Tuck for breakfast. Everyone filled their bellies with delicious French toast sticks and sausage links. Much needed fuel, especially for the guys heading out of camp today for epic adventures. Santiago D. JT H. Cullen L. Charlie T. and Freddy V. headed down the French Broad for some intense white water rafting. Mason B. Gresham C. Andres D. Grant S. and Spencer VG. headed to DuPont state forest to ride some of the most sought after mountain bike trails this side of the Mississippi. Lastly, we have Tyler B. Griffin W. Joseph L. Jackson D. Graham W. and James F. still out on an overnight backpacking trip. As I type, the guys are out there setting up camp, cooking dinner and I’d bet they’ll be swapping stories and roasting s’mores around the fire before the night is over. A trip they’ll never forget!

Anyways, don’t think the guys on trips were the only ones having a blast. After we heard a true story from Andrew D. the 2 words that are sure to cause pandemonium echoed out in the chapel. Before “ANND NOOOOW” could even get out of Andrew’s mouth, the boys were up on the benches cheering at the top of their lungs! Could this mean today is tribal palooza!? After the Sultan of Fun, Carter B, ran around like a mad man for a few seconds and punched the air we finally got the news we hoped for. Today would in fact be tribal palooza!! You may have seen some of the action on social media. (If you’re not already following you totally should be. Our media team does an incredible job of giving a glimpse into every day life here at camp. You don’t want to miss it, trust me.) So instead of regular activities, we played nothing but Tribal activities all day.

So following chapel and cabin clean up, all the campers headed up to The Mark to find out what our first activity would be! Once the campers had all taken a seat, in marched President Snow, his body guard, and the Game Master. Everyone quickly realized the Hunger Games were about to commence! The men of Greybeard were selected as tributes and were escorted out by the game master to receive further instructions on how the game would work. Meanwhile, the rest of camp split up for 2 equally epic activities. Junior camp played a thrilling game of sock war and Senior camp battled it out in the beautiful game of soccer! Tune in tomorrow to find out who won those activities!

Once the tributes were briefed and had gathered their gear, everyone made their way down to the beach to watch the games begin! It was an epic day of battle with the odds stacked against them, but the men of Greybeard fought with honor and dignity. Following a hearty lunch of chicken sandwiches and French fries and the best hour, rest hour, we were down to 2 tributes! We all came scampering back to the beach to see the final showdown. Rawson B and Geoffrey M had fought hard and were prepared for the final battle. Respectfully, they both dropped all weapons and agreed to “hand to hand” combat, which was represented by a flag tucked into their shorts. Rawson B tried to make a quick move to grab Geoffrey M’s flag, but he dodged quickly and as Rawson was stumbling forward he snatched his flag and claimed victory! With smiles on all their faces, the tributes gathered together to shake hands and congratulate the newest victor of the Timberlake hunger games!

Now just because we didn’t have regular activities didn’t mean the boys weren’t hard at work on earning bars during free time. A slew of activities opened up, giving the guys a chance to continue developing skills in their various disciplines. Some of those were Thomas M and John R who both got their bronze in canoeing! Also, Spencer L. And Brayden C. earned their bronze in guitar!

Once free time had come to an end, we all made our way up to the Outback for another evening activity, El Presidente! Flags were pulled and Presidents tried to evade being captured in this camp classic.

All this action had us ready to eat! The boys ran down to dinner and dug into some delicious BBQ chicken and cornbread. Yum! After we had thanked the kitchen for their incredible work, it was time for the final game announcement… MISSION IMPOSSIBLE!! Right now the boys are running around camp battling the staff and each other to capture as many bases as possible before time runs out. Who will win!? Personally I’m rooting for the Seminoles but it’s anyone’s game!

After the game all the cabins have some stellar cabin activities to get to.

Huckleberry is putting the puppies to sleep.

Finch’s Landing has a free swim.

Further Up is raiding the trade post. (We got permission from John M, don’t worry)

Further In is playing airsoft.

Big Piney is having a game of kickball.

Stomper’s Knob is having a talent show.

Little Slaty is having a volleyball/thunder ball tournament

And Big Slaty and Greybeard are roasting s’mores.

So concludes another action packed day here at Timberlake. Your boys are learning and growing every day here and I know they will all have some amazing adventures to tell you about when they get home. In the meantime, I’m off to get in on this rope swing action with Finch’s Landing. See y’all soon!