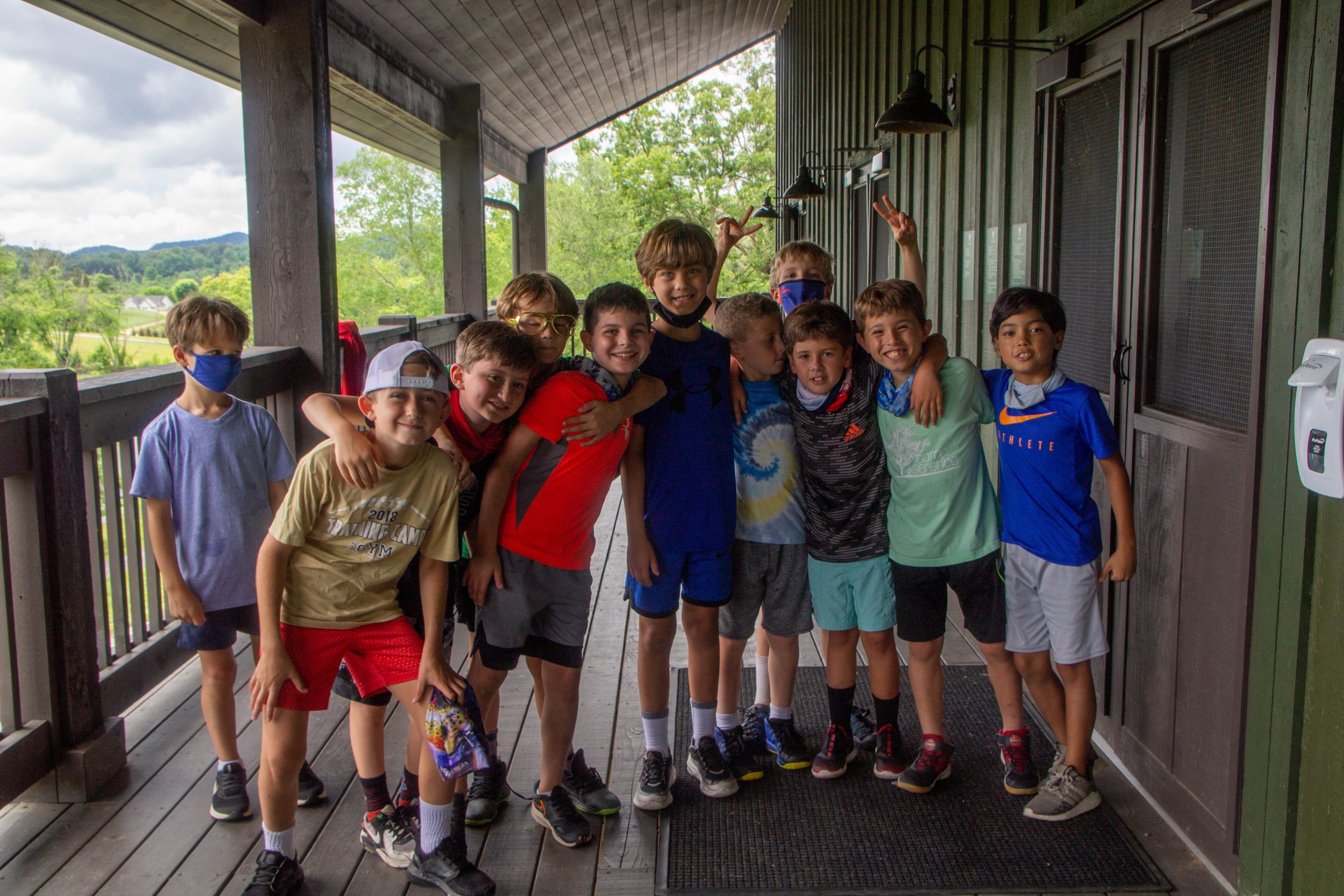 This beautiful Friday morning here at Camp Timberlake started with the bugle going off at 7:00 am. The campers woke up and were eager for breakfast. At breakfast today, we had some delicious french toast and sausage. Some campers chose to include cereal or fruit with their breakfast so they would start their day with a super nutritious meal. Immediately after breakfast, we went outside to do our morning yell.
During the first half of the day, it rained, however, that did not stop the
campers from having a good time at their activities both in and outside. Even with the slight rain Ashton A, Will R, David F, Will A, TJ E, Gus A, Rylan S, and Banks O, went on a rock climbing trip at the Chimneys. The fun did not stop there though. At Camp Timberlake, mountain biking
rode Spyglass trail. In backpacking, Hudson E was able to do the taut-line hitch knot. In swimming class, Evan L. got both his bronze and silver bar in one day! Earning two bars in one day is extremely difficult and is truly an impressive accomplishment. After the second activity period, the campers went back to the Tuck for an amazing lunch of pizza pasta, and breadsticks. During lunch, campers learned that the Golden Eagle Tribe won last night’s evening activity, Age of Empire. They also learned about their score for cabin clean-up. Big Piney set a new cabin clean-up record for this summer with a score of 9.5 out of 10.
After lunch, the rain stopped, and the campers returned to their cabins for 30 minutes to rest and relax. This was followed by an hour of free time where they could hang out around the beach or keep working to earn bars for certain activities. During this free period, campers that are here for
only one week were able to launch some model rockets. After the free period, the fun kept going. In kayaking, Henry O. was able to do a kayak
roll. Also in Kayaking Quinn B. Ben E. and Rylee E. tried and loved the kayak slide. In rock climbing, Bane B. climbed the boulder in an astounding 16 seconds. In Guitar class Jame D.
learned two new chords. After all these activities, the campers had dinner where they had some mouthwatering country-fried steak, mashed potatoes, and bread. For dessert, campers ate what is
the best-loved dessert here at Camp, Oreo dream. Also, during dinner, it was announced that tonight is cabin night.
For cabin night, Campers from the Huckleberry cabin went to the beach to have s’mores. Finch’s Landing played camo and candyman on the mountain biking trails. Campers from Further Up started by having s’mores at the chapel then could choose to do fishing or play
gaga. Further In, played hunger games and had s’mores. Hawksbill played with puppies from the paws program and played giant Jenga. Turtleback had a cereal party and sang karaoke in the Tuck. Little Piney played archery tag. Big Piney did a wrestling tournament in the Mark.
Stompers Knob had a free swim at the lake. Little Slaty went to the Big house to eat some pancakes and play some card games. Grey Beard joined Stompers Knob for a free swim at the lake. After these awesome evening activities, the campers went to bed a little tired but ready for
some more fun activities and camaraderie tomorrow.