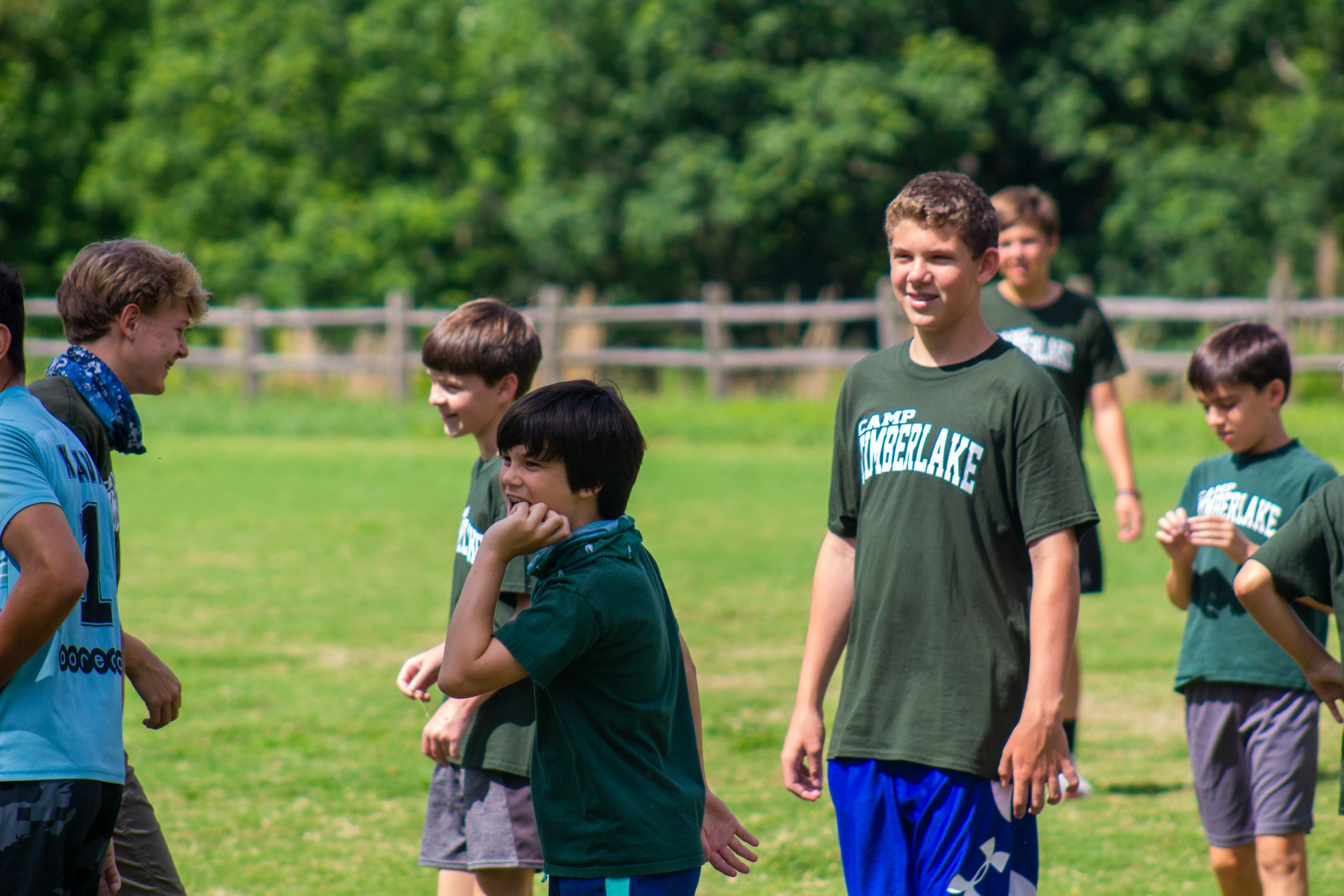 Happy Sunday! Today at Timberlake was a very exciting and different day, as we said goodbye to our Short Term 1 campers and welcomed our new Short Term 2 guys to camp. Because it is the best day of the week (Sunday), all of camp got to sleep in an extra hour this morning, which was much needed after a fun and jam packed first week of the summer! Cinnamon roll Sunday was a huge hit in the Tuck this morning, and I personally enjoyed the chocolate milk served at our neighborhood tables. After breakfast, junior camp headed to the cabins to say goodbye to the Short Term 1 campers while senior camp headed up to chapel. Sunday chapel is special, as we heard the senior camp counselors pray over their campers individually for a safe and fun week.
Not present at the chapel were the lucky guys who got to go on a kayaking trip today! Case M., Ben E., Ryker R., Banks P., Henry O., Quinn B., and David F. had an awesome day out on the Tuckaseegee River shredding some whitewater with counselor Alex A. Senior camp got to enjoy
a different schedule than our normal weekday schedule – a basketball tournament was won by
The Ballerz and they defeated Big Piney counselor Tommy S.! The men of Stomper’s Knob got first place in the fort building contest behind the backpacking hut, and an intense spikeball tournament was enjoyed by all. After our Short Term 2 campers arrived, everyone headed to the
Tuck for a delicious lunch of FRIED CHICKEN! This is a staple Sunday lunch and it never gets
old. We also had lunch dessert (a rarity) of warm apple turnovers. After lunch, we headed to enjoy a full hour of rest before junior camp got to participate in the best free time activity ever, free swim!! The cabins of Huckleberry, Finch’s Landing, Further Up, and Further In had so much fun on the blob, rope swing, high dive, and diving board, and the weather was perfect for an afternoon on the lake. The senior camp guys enjoyed their trading post while playing some intense games of nine square, gaga ball, and volleyball on the beach. Adding to the afternoon
excitement, some of our older campers returned from a great overnight backpacking trip up to Linville. Nate S., Scott K., Merrick C., Carson W., Harrison C., Isaac L., and Eli W. had an amazing time hiking in the North Carolina mountains and camping out for the night. Everyone
then headed to the council ring to go to the initiation, where we got to welcome the new Black Bears and Golden Eagles to their tribes! Initiation is such a special event, and the new campers
are made to feel part of a family right away.
The new Golden Eagles are:
Benton B.
Baron C.
John H.
William H.
Beau M.
William M.
Hunter O.
Cole R.
Jude V.
The new Black Bears are:
Knox B.
Raylin G.
Edward I.
Cash O.
Hudson P.
Drew R.

Penn S.
Luke W.
John Z.
After initiation, we had pizza hand-delivered by Winston H. to our cabin porches! Then, everyone headed to The Mark for Sunday vespers. The famous local bluegrass/folk/rock band the Black Mountain Oysters came to sing some songs and we were all entertained by a few staff skits. Then, we heard a great chapel story and message from John. After vespers, we split into cabin areas to play some fun evening activities. The youngest four cabins played a game of tribal sock war while the intermediate cabins played soccer, and the senior camp guys played tribal basketball. Today was an awesome day at camp, and as I write the crickets are chirping and the sun is setting over the beautiful mountains here in western North Carolina. Thank you for sharing your
boys with us this summer!
Lucie Christian
Waterfront Director
Timberwoman
Proud Red Wolf