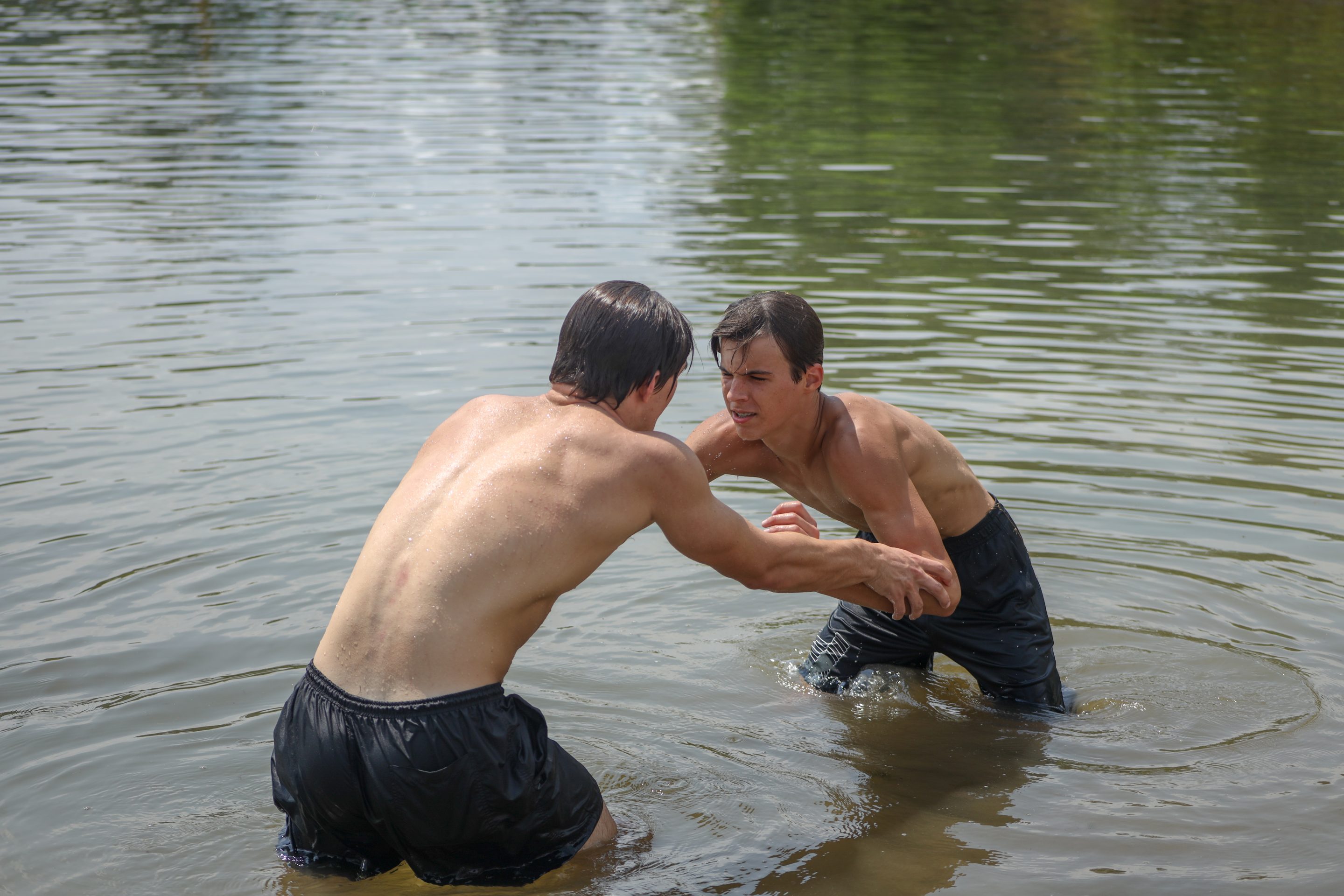 An eventful Tuesday morning began at Timberlake with a beautiful low fog rolling across the paths of camp. All of the hungry campers walked briskly to the Tuck, eager to start the day with a delicious breakfast of sweet confetti pancakes and crispy bacon. After another riveting Tuesday-themed Morning Yell, James B. led chapel. He brought up a true story that promoted the question, “What does God require?”

Our final round of Tuesday/Thursday/Saturday activities proved to be exciting for everyone. In PAWS, campers spent time playing with the puppies and having some fun with the water hose. The dogs love it! Across camp at the chapel, improv class got creative with finding their own props, followed by a tricky game of mafia. Bradley J. shredded the pump track in mountain biking, while Enzo R, Wyatt F, and Duke S crafted a teepee-style fort behind the backpacking hut.

Timberlake once again convened in the dining hall to refuel with tasty hot dogs and warm pretzel bites. With full bellies, we learned which tribe won last night’s game of Search and Destroy. The Black Bear tribe! After lunch, Ford B, Maverick H, Davis O, Hays S, and Spencer V returned from the overnight combo kayaking and mountain biking trip. On the Tuckasegee River, Spencer V and Maverick H both accomplished their first successful combat rolls! The group also dominated the trails at Tsali. Joseph B, Grant H, Will M, Bo S, and Samuel C returned from an overnight backpacking and camping trip after much success in the nearby Pisgah National Forest.

A much-needed rest time allowed campers to revive some energy, read, and write. During free time, Bo S and Elliot S attempted the Deerslayer wrestling challenge at the lake. A crowd of campers and staff cheered on as both boys completed the difficult challenge to earn their gold bars in wrestling!

In afternoon activities, Davis O. completed his groupings to earn his silver bar in archery before heavy rain began to fall. During the downpour, Will H was victorious in a fencing bout against the instructor. EJ B learned how to sprawl in wrestling, and the swimming class played an intense game of Spikeball on the beach. Jonah N and Matthew A learned some new card games while Nick S finished making his bronze-level rocket.

As the rain lightened, the sun peeked out again on Timberlake campers journeying to eat plates of hearty country-fried steak, sweet yellow corn, and creamy mashed potatoes. Dessert was a colorful highlight of the day with rainbow sprinkled cake. Tonight’s evening activity will be none other than the camp-favorite COMMANDO! Water balloons will be flying everywhere as the boys compete for their final chance at winning Timberlake’s tribal competition for the Banner.