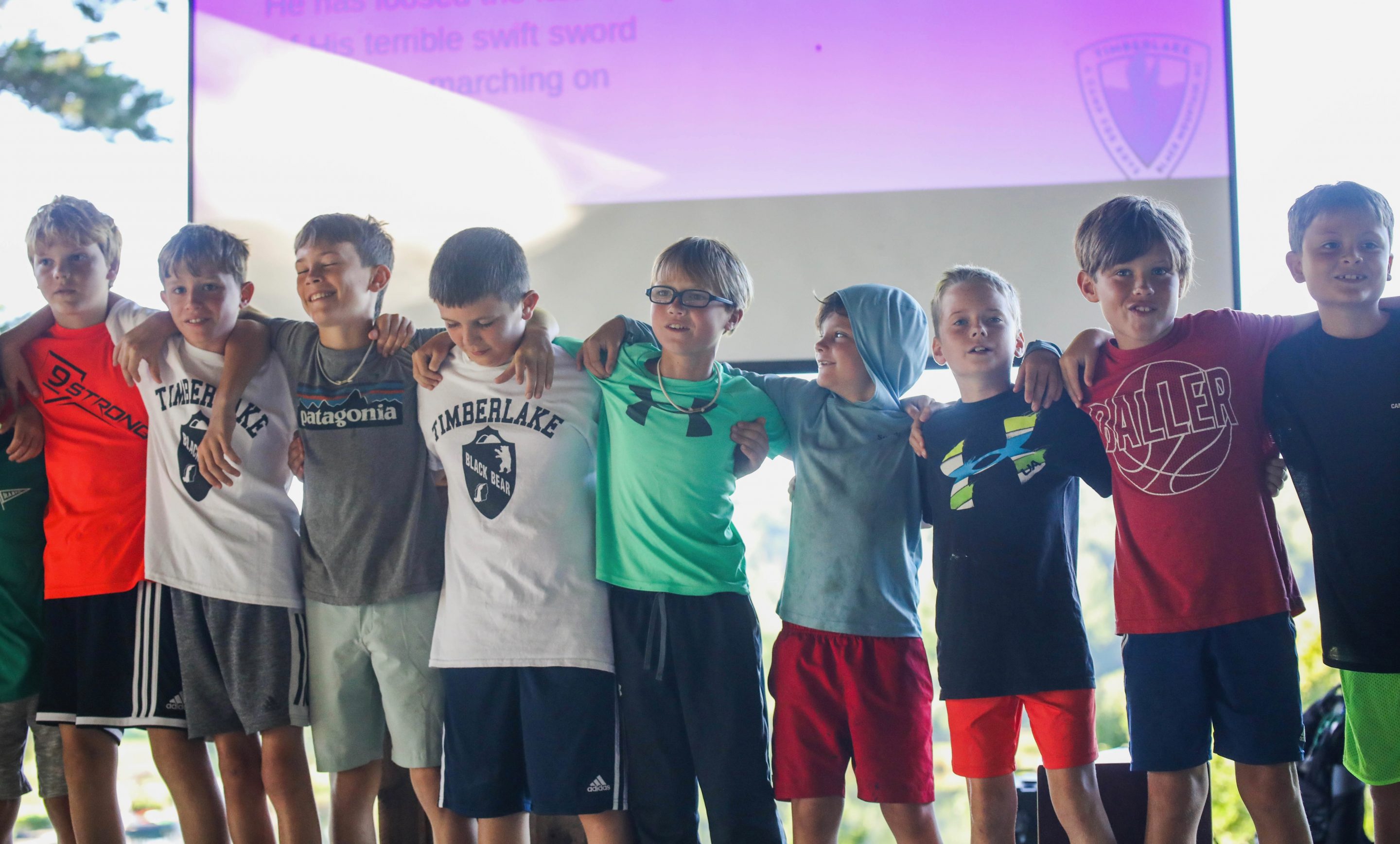 As the morning mist rose to give way to a beautiful sunny day, the campers all rolled out of bed to fuel up for another exciting day here at Camp Timberlake. The french toast and sausage patties were extra tasty this morning, in my opinion. With full bellies, we announced our presence to the heavens with the usual morning yell and made our way to chapel!

While we heard a true story from our very own John M, a bunch of the guys were getting ready for some epic trips. A trail running trip went out to Montreat. Those guys were Elliott S, Alex W, Heath B, Will R, and Bo S.  Our kayakers went to test their skills on the Pigeon! On that trip we had Ford B, Joe L, Max W, Geo C, and Oliver G.  What an awesome day those guys had off the property. Meanwhile, back at camp, we finished up chapel and made our way to cabin clean-up!

After another very close battle for the cleanest cabin, it was time for some activities! It was a great day for it as well; the sun was shining, the wind was blowing, and our boys were hard at work in their activities.  Over at the chapel in Improv class, Ryland K, Elliot S, Bo S, and Andres D got their golds in improv! Way to go, fellas! In other gold bar news, Theo T got his in basketball, and Matthew A got his in riflery after running the range commands and completing some seriously impressive groupings. The morning flew by with all that action, and lunchtime was welcomed by all.

Lunch was a divine feast of chicken tenders, french fries, and assorted fruits. One of my favorite meals we have here at camp… But anyways, we got to hear the results of the morning’s clean-up efforts. Stomper’s Knob got ANOTHER 10/10! They certainly are pushing for that golden plunger and pizza party. It would take a comeback the likes of which I’ve never seen to beat them with only one day left for them to be dethroned. Before we left for the best time, rest time, we had to find out the winner of the previous evening’s tribal games! The Golden Eagles fought honorably, but the Black Bears reigned victorious in both Junior Camp Juggernaut and Senior Camp Pirate Ball. As a Golden Eagle myself, I definitely needed to lay down after hearing that news. Off to rest time!

The afternoon brought with it more sunny skies and many more adventures. During free time, Bo S earned a mark for making a one-match fire. A task that is much more difficult than it sounds. David C also earned a mark for doing his last Crooked Mile run! 6 laps in one session is an incredible feat!

Third and Fourth periods were chock full of action as well. Over at the archery range, Theo T and Liam T both got their bronze bar, and Ferdinand B got his silver! Right behind them on the other range, Ryland K got his silver in Riflery. In Fitness class we had two guys get their gold! Bo S and John M put in some serious work for those bars.

What a day we had! The fun didn’t stop there, though. After a big ole dinner, we couldn’t wait to hear what the evening activity would be tonight… Archie D donned the famous red helmet, made his laps, punched the air and screamed “COMMANDO!!!.” Our shouts of approval could be heard all the way at Merri Mac. This is one of the staples of tribal games here at Timberlake.  Commando is an epic water balloon battle that we have up on Spencer’s Green and in my years here at camp I don’t think I’ve seen this many water balloons. It is going to be epic! Tune in tomorrow to find out who takes the last banner point up for grabs this summer! My money is on the Golden Eagles:)